Dope Island: The Cleveland Movie Blog Saves Cleveland! (because to be called the Burnt-Out-Ruins Movie Blog is bad SEO) 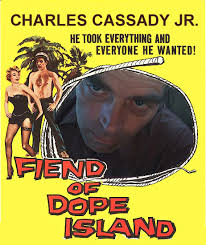 These are troublesome times  madness, murder sprees, race terrorism, 900 million guns and sequels to INDEPENDENCE DAY, ZOOLANDER, MY BIG FAT GREEK WEDDING and GHOSTBUSTERS that nobody wanted. Sometimes in the course of human events, it is necessarily for the Fiend of Dope Island to (largely) step out of his bad-cinema ghetto and provide a valuable public service. And likely prevent the complete destruction of Cleveland. What the valuable public service is, I haven’t decided yet.


But the imminent annihilation of Cleveland is, of course, a very possible outcome of the Republican National Convention. The fractious event is soon to take up a about two weeks time in downtown  if downtown even lasts that long. After all, Dresden and Troy and the Rebel base on Hoth were leveled in practically no time (Stalingrad it did take a bit longer), and they didn’t even have Donald Trump.
Clearly, whoever thought it would conceivably be a good idea to have a presidential nomination  convention here in the year 2016 deserves to be inducted into the Cleveland Ideas Hall of Fame, and will no doubt parley that into a better job in the Sun Belt (once they get the smell of tear gas out of their interview suit).

Such dark talk! But I must tell you, in the manner of the guy who thought that sailing the Titanic through those April ice fields might not have been advisable, there is STILL TIME to turn this ship around. Time to avert disaster and see this city live to lay off workers another day, continue its long, lazy spirals in endless post-industrial economic recession, instead of just burning to the ground in July.
Here are a great set of excuses to cancel the RNC. Just cancel it. Right here, right now. Nothing more to see, move on folks.

The initial sheepishness and discomfort will easily be replaced by relief that catastrophe was averted. And if you play them right, these following excuses might even allow Cleveland to get away with some minimal dignity and honor intact.

- WE MUST CANCEL THE RNC BECAUSE it turns out the Russo Brothers had to come  back and shoot extra scenes for a Special Edition of that CAPTAIN AMERICA sequel they made here about three or four years back, remember?  So once again, all the roads are shut down, all thoroughfares impassible, a blackout on the Wollstein Center, Quicken Loans Arena and Progressive Stadium. And that’s just for Scarlett Johansson getting into the Black Widow costume.

- WE MUST CANCEL THE RNC BECAUSE the Torso Killer still hasn’t been caught, and
you can't be too careful.

- WE MUST CANCEL THE RNC BECAUSE the whole city is on lockdown-like hiatus to try and make Johnny Manziel go sober. No restaurants or bars or retail, because he might order liquor. No transportation, because he might huff the gas or diesel fumes. No hospitals or medical centers open, because he might break into the pharmacies. No schools or museums, because he might get to the paint thinners and turpentine and glues that artists use. No water supplies; he might use that an excuse to buy “bath salts.” No Jack Casino, either; he might have a gambling habit. Addiction experts say that making Johnny go cold turkey this way until, ohhhhh...late November...might give Manziel a fighting chance of starting again as a Browns quarterback. They’ve already paid him $200 million to re-sign anyway.


- WE MUST CANCEL THE RNC BECAUSE there’s a very real likelihood that thousands of delegates, visitors and media might get held as sex-slave hostages behind locked doors in private Cleveland homes for ten years (that’s probably the reason Dr. Ben Carson dropped out of the race). Yes, sure, Charles Ramsey is still out there, but he’s only one guy, can’t possibly save all the victims this time. Better safe than sorry.

- WE MUST CANCEL THE RNC BECAUSE the Franklin Castle, as we all know, is violently haunted. And ghostbusters, contrary to what you might be told, are just make-believe, in the movies and on dumb TV. In reality, Cleveland is utterly at the mercy of the horrible undead spirits and specters of the old Tiedemann Mansion, and it would be incredibly irresponsible of us to welcome the RNC while this danger hangs above us all.

- WE MUST CANCEL THE RNC BECAUSE in order to break our sports curse, for the Cavaliers and the Lake Erie Monsters to take home championships, and for the Indians to go on a historic winning streak, the city secretly struck a pact with Satan. Yes, just like in Faust. In July the Dark Lord will rise from the pit of hell (one of the portals is at the Rock Hall of Fame, or did you guess that already) as a seven-headed dragon, flanked by his princes Lucifer, Asmodeus and Beezelbub, and claim all he surveys in Cleveland as his infernal domain. All who hath resideth within 666 Hebrew cubits of the city limits shalt be branded upon the forehead with the Mark of the Beast, as foretold by the prophet John in Revelations, and woe shall forevermore be the name “Cleveland!" But as a consolation prize for the canceled RNC, visitors who had to cancel out at the hotels will get an opportunity to buy LeBron 23 jerseys, at 50 per cent off.

- WE MUST CANCEL THE RNC BECAUSE Cleveland’s got a really, really big Pokemon GO! Game underway and it just can't be interrupted.

- WE MUST CANCEL THE RNC BECAUSE in view of disappointing second-quarter earnings, Cleveland has just gone out of business. Weve all seen it happen before, and thats how it went down; one day everyone got up and went to work one morning and just found a big padlock on Cleveland and a handwritten sign taped up telling us we were laid off. Not even a chance to clean out our desks. Anyone found loitering in Cleveland now will be assumed to be stealing copper piping and wiring for scrap, and likely shot as a looter, and we wouldn't want that to happen to the RNC, now would we?

- WE MUST CANCEL THE RNC BECAUSE in a terrible misunderstanding, it turns out that the city that actually won the right to host the RNC was Cleveland, Tennessee. Helpful community ambassadors at airports, rail and bus terminals will happily put you all on other rides in that direction.

- WE MUST CANCEL THE RNC BECAUSE the city is in the midst of a horrifying zombie plague. Employers realized that they could just hire cannibalistic walking dead at wages even cheaper than illegals; just feed them on poor-people brains obtained under the table from morgues of the Cleveland Clinic. All hospitality venues are now infested by flesh-eating ghouls. All except for the cemeteries, strangely enough, where local executives decided to bury healthy, living people in coffins instead. Here, that's called "outside the box" management philosophy.

- WE MUST CANCEL THE RNC BECAUSE some smarty-pants CWRU students used the computer memory of a Tesla self-driving car to wire up Cleveland City Hall and try to make this city operate itself. Consequently, Mayor Jackson and City Council just stopped paying attention and got distracted sending texts, sexting, playing around on Facebook, Snapchat, Instagram etc. In the meantime the whole city went over the Shoreway and into the lake. So we're in no shape to hold the convention now.

- WE MUST CANCEL THE RNC BECAUSE we've got a terrible great white shark problem on the beaches here, and Frank Jackson isn't going to be like that sleazeball mayor in JAWS who covers things like that up because of the bad publicity. Why, weather conditions may even form waterspouts, and the visitors will be under the threat of a full-fledged sharknado. Say the RNC is cancelled as a precaution, until our hero Coast Guard can come back from patrolling Lake Erie with a load of captured great white sharks.


- WE MUST CANCEL THE RNC BECAUSE the heroin epidemic in Ohio has gotten so bad that it is now compulsory to be a heroin addict in order to enter Cleveland. If you are not a heroin addict you are considered a threat to the status quo and could be arrested on charges of disturbing the peace. Furthermore, anyone who stays in Cleveland longer than an hour will have to comply with ordinances demanding a mandatory life-threatening overdose. Those factors should go far in keeping Donald Trump away; I have information that he is quite a straight-edge.


So there you are. Several perfectly valid, good excuses for telling the rest of the country that the RNC in Cleveland is hereby cancelled. You'll thank us for it.

And if the RNC still goes on as planned, all I ask is that at the Cleveland Museum of Art, if they've got any paintings of dogs playing poker, I hope they can all be removed to a safe place. I like those.
Posted by Charles Cassady Jr. at 1:50 AM