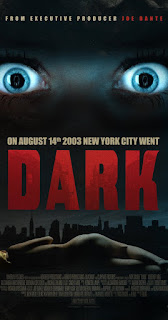 NYC fetish model turned yoga teacher Kate (Witney Able) is having problems in her relationship with photographer Leah (Alexandra Breckenridge). For starters, we learn right off the bat that Kate likes it a bit rougher in the bedroom than her lover. But their problems go deeper than just sexual compatibility. Things come to a head when Leah goes out of town for the weekend just in time for the 2003 blackout to hit. Alone in the dark, Kate worries that she's being stalked. There certainly are some creepy guys around, but it isn't long before she slips from reasonable caution into something a little less rational, with ultimately grim consequences.

Thematically DARK is very much in the vein of Roman Polanski's REPULSION, but done in a more modern "indie film" style by director/co-writer Nick Basile. Lead actress Able delivers a strong performance, but Basile's slow burn approach ultimately wears thin, with a payoff that's far too predictable to have much impact. It's a solid, professionally made, and well-acted film that I'm sure will satisfy those just looking for a decent little thriller to kill the time, and Basile certainly shows promise as a director. But there isn't enough about the film that stands out from the crowd to make this one a must-see. 2 ½ out of 4 stars.
Posted by Bob Ignizio at 12:00 AM