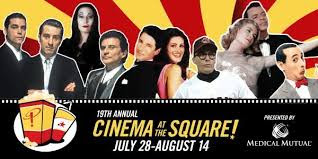 The Republican National Convention has finished in downtown Cleveland. The blood-drenched streets have been cleared of the bodies, but those public officials who survived must now debate on what to do with the smoldering ruins of what was once a major city – bulldoze them into the ground and rebuild, perhaps a gigantic white-marble memorial to the slain? Or just let what’s left of Cleveland stand forevermore, as a mute testimony to humanity that what happened here must NEVER AGAIN be permitted in a civilized and humane society, just as what was done with selected still-standing structures in Hiroshima and Stalingrad.

The psychological scars will remain for a long, long time to come, even as FEMA trailers relocated the last residents of what was once downtown to trauma-rehabilitation centers and experimental open-air asylums in cordoned-off parkland. How will Cleveland ever recover?

Well, there’s that Paul McCartney concert. But for those of you without that kind of money, Cinema on the Square is back again, to spirit us away from awful reality and help us overcome memories of carnage that we can never unsee.

The Playhouse Square tradition is an annual, weeks-long summer film series that hearkens back to the era when the Playhouse Square theaters - at E.17 Street and Euclid Avenue - were not strictly devoted to live performance but also destination movie venues.

Old Playhouse Square hosted both first-run Cinemascope and Cinerama widescreen features but also for `roadshow' features, successful Hollywood epics and hits that played, literally, for years and years, regularly returning to town. Know that these were the days before the advent of internet streaming/downloads, home-video and cable TV, not to mention home-video and Netflix.

Yesterday's vintage moviegoing experience thrives each summer now for the duration of Cinema on the Square, with the Palace Theatre deploying a giant 20-foot by 47-foot Hurly-Glo Screen, live Kimball organ-music interludes, and classic pre-movie cartoons showing before the classic features.

The Cinema on the Square schedule for this summer seems to be rather heavy on late baby-boomer-early Generation X nostalgia, films from the 1980s and 90s. As though to return us all to a more innocent era of living recall. Back when we still had hope for the future.

There is even a revival of PRETTY WOMAN, uncannily coincident with the death of director Garry Marshall (did all the hideous agony and savage barbarism of the RNC inspire a psychic premonition of death for Cinema on the Square programmers?).

Well, let the healing begin. If at all possible:

General tickets prices are $5 per individual show (including the
weekend matinees). Advance passes called "Flix Tix" are good for six films and
are available for $15 each.

Tickets are sold at the Playhouse Square Center ticket window in
Cleveland, all tickets.com outlets, by phone at 216-241-6000 or online.

Posted by Charles Cassady Jr. at 3:44 AM