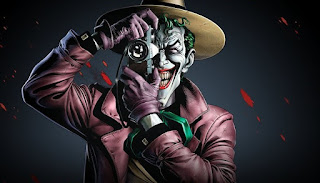 By now anyone who claims to be a fan of superhero films have at least heard of the Alan Moore and Brian Bolland classic graphic novel, BATMAN: THE KILLING JOKE.

Being more into movies, I’ve rarely peaked at the source material of any film – primarily because I don’t want to taint my review with comparisons.

However, being a fan of Warner Bros. Animation’s direct-to-disc films (owning them all), I am very familiar with them.  Despite a few misses, they generally include high quality storytelling in a 90-minute package.  With the film version of BATMAN: THE KILLING JOKE high expectations come.   From judging the final production, they were too high.

THE KILLING JOKE is kind of “meh.”  Not bad.  Not great. It’s kind of inert and flat despite the fact that filmmaker Sam Liu and producer Bruce Timm release a film with a well-deserved R-rating which allowed them to deal with the book’s heady content.  The featured villain is The Joker, so think malice and malevolence on mescaline.

Unfortunately fans of the comic book and those taking in this movie are likely to notice that something feels off. It’s rare for a direct-to-home video release to see the inside of a theater and cynical fans might consider the limited screenings ahead of the Aug. 2 release for home entertainment a money grab.  They might be right. The final showings are tonight across the area.

This despite the fact that the filmmakers give fans the best when it comes to voice talent for this Batman animated adventure.  Mark Hamill received acclaim for his scene-stealing work as The Joker in the early ’90s BATMAN: THE ANIMATED SERIES. Mention quintessential portrayals of the character and Jack Nicholson, Heath Ledger and, yes, Hamill come to mind.

With The Joker on the screen, Batman normally plays second fiddle.  Still with that being the case, Kevin Conroy, who worked with Hamill on that animated effort, carved out recognition and gained a following.  There’s little wrong with their reunion.  It is, in fact, the best part of the experience.
Running a close second: humanizing The Joker in flashbacks telling his fascinating history before his chemical bath and loss of sanity.

However, screenwriter  Brian Azzarello provides a Batgirl subplot that feels like little more than padding.  For those such as me, purchasing the blu-ray disc will be a no-brainer.  For anyone who’s not a die-hard fan when it comes to these DC animated films, no one could blame them for taking a pass.

There exist still two chances to judge before buying the home video version with screenings at Cinemark Valley View at 7:30 and 10 tonight