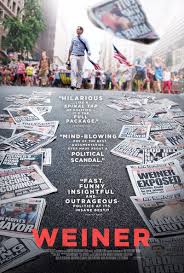 When you're a politician with the last name Weiner who accidentally tweets dick pics of himself, you're more screwed than usual. The jokes practically write themselves, and what would have died down quickly for a Jones or a Smith takes on a seemingly endless life of its own. Just as former Democratic congressman from New York, Anthony Weiner, who was involved in just such a scandal in 2011, eventually leading to his resignation from office in June of that year.

After a seemingly heartfelt apology and promise that nothing like this would ever happen again, Weiner's wife (and Hilary Clinton staffer) Huma Abedin forgave him. So, too, did a substantial number of New Yorkers, who felt a scandal of this sort wasn't nearly as relevant as Weiner's political positions and track record of fighting for Democratic causes. So in 2013, and with the support of his wife, Weiner jumped back into the political arena as a candidate for Mayor of New  York City. Furthermore, he agreed to have a documentary film crew record it all. What could possibly go wrong?

Quite a bit, as it turns out.

Displaying a shocking inability to learn from his mistakes, Weiner became embroiled in yet another scandal involving more dick pics and some cheesy sexting conversations. This time, there was the added comedy bonus that he had engaged in these activities using the pseudonym "Carlos Danger". How could the tabloids, cable news channels, and political comedians like John Stewart and Stephen Colbert resist?

All through the resulting media circus Huma stands by her man. Not without some discomfort, mind you, but evidently having already been aware of these additional indiscretions, stand she does. Voters are largely less forgiving of this second betrayal, but Weiner refuses to see the writing on the wall. He's convinced that, somehow, he'll win back enough of them to at least make it to a run-off election.

If you don't already know the outcome, I won't reveal it here. Suffice it to say, though, it doesn't really matter in the context of what Josh Kriegman and Elyse Steinberg's documentary WEINER seeks to convey. It's more about how the same narcissistic personality traits that make someone an effective politician can also lay the seeds for their downfall. Or cause them to agree to be the subject of a documentary even as their life is going down in flames. But don't worry, it's not nearly as serious a film as that might make it sound. Even the filmmakers can't resist rehashing all the Weiner jokes. 3 out of 4 stars.
Posted by Bob Ignizio at 12:00 AM