Horror Hotel Weekend shows the Republicans how a REAL convention ought to go, June 9-12 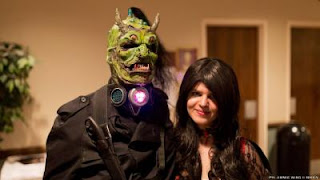 Notice how Hillary Clinton keeps having coughing fits when she gives speeches in public. I hate to tell you, but I’ve seen lots of cheap cannibal-zombie movies, and that’s usually how the epidemic starts.

In order to know what to do next, I strongly suggest all of you attend Horror Hotel in Hudson.

Begun in 2012, Horror Hotel Weekend, at the Clarion Inn in Hudson, is an annual event convention spun off from The Indie Gathering, a long-running
series of meetings and conventions by/for do-it-yourself northeast Ohio filmmakers.

The big Indie Gathering festival happens in late summer. But from its submissions, organizers realized backyard filmmakers the world over jammed to horror and science-fiction genre shorts and features. Thus, in 2012, the decision to hold a Horror Hotel Weekend dedicated to the fantastic and the frightening.

So that must have been the zombie apocalypse predicted by the Mayan calendar.

Horror literally brings the world to Hudson. Horror Hotel has attracted filmmakers from the Far East and India, the British Isles, Latin America and elsewhere.

There will be memorabilia and movie vendors, special presentations on entertainment law (now there’s a horror story for you), and contests devoted to makeup and soundtrack scoring. The ever-popular “Scream Queen” talent show allows women (often attired in costumes that are little more than duct tape or skin-tight prom gowns, just like Donald Trump would want it) to compete in shrieking.

Career networking parties happen, and - weather permitting - there will a classic-auto cruise-in AND a retro-style outdoor drive-in type screening of fan-submitted movie entries (audience limited to the first 100 vehicles).

Tickets range from an advance VIP admission for the whole weekend at $50, to varying one-day rates or $7 for individual feature-film screenings. Seeing the classic cars at the cruise-in is free.

For more information go online to the official website at http://www.horrorhotel.net/
Posted by Charles Cassady Jr. at 11:16 AM