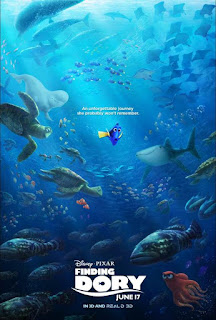 Our favorite fishes, Nemo, Marlin, and Dory, are all back in FINDING DORY, the sequel to the now beloved Pixar film FINDING NEMO. Last time around Marlin (Albert Brooks), Nemo’s dad, had lost his son in the Pacific Ocean. His journey to find Nemo led him to encounter many other delightful characters, including a short-term memory loss afflicted blue tang fish, Dory (Ellen DeGeneres).

Luckily for us, Marlin and Dory found little Nemo. As we revisit the gang, everyone is happily living together. Dory still can’t remember a whole lot, but she knows her new family of Marlin and Nemo. As she enjoys her new home, she starts having flashbacks to her childhood with her mom Jenny (Diane Keaton) and dad Charlie (Eugene Levy). Dory starts longing not only to remember more about her parents and childhood, but wants to set out to find them.

Along the way we re-encounter some familiar characters, which is nice, but DORY successfully avoids telling the same story as NEMO. Most of this film takes place above ground on the coast of California in a Marine Life Institute for helping injured fish. It turns out this is where Dory was born and her hope is that her parents still remain in one of the Marine’s many exhibits. In Dory’s rush to get to California, Marlin and Nemo lose track of their friend. So while Dory is tracking down her parents, Marlin and Nemo are trying to track Dory (all in the same Marine).

The film is packed full with fun new characters. At its center is Hank (Ed O’Neill), a cranky octopus. Hank, a mover and shaker at the Marine, has agreed to help Dory find her parents if in exchange he can take her place on a truck set out for Cleveland, Ohio. Dory has accidentally been tagged to be put on the truck for the next morning, so time is of the essence.

Hank has a dream of living in a glass aquarium with no one to bother him and Cleveland is just the place for him. Before this can happen, he must  first suffer Dory’s endless memory loss and is begrudgingly dragged on her journey. Still, Hank is a fantastic character. His cantankerous attitude mixed with his big heart (all three of them) is perhaps one of the films greatest accomplishments. Or maybe I just like him because he WANTS to live in Cleveland!

So there it is. For Dory, it’s find her parents or bust. For Marlin and Nemo, they need to find Dory. And for Hank it’s get to Cleveland or continue living in misery at the Marine Institute. All the other new characters are happy helpers along the way, but there are a handful of really memorable ones including a couple of know it-all sea lions (and their hilarious reject brother Gerald) and one majorly deranged loon named Becky. Gerald and Becky are funny enough to support their own movie (what the Minions were to DESPICABLE ME).

Despite all of DORY’s fine qualities, including new characters and a fun adventure, where DORY feels lesser than its Pixar predecessor is its emotional core. Like almost any Pixar film, characters reach heartfelt realizations, regardless of whether or not the characters accomplish their goal. In DORY we have a conclusion, it just doesn’t pack the punch of some the studios best.

DORY doesn’t quite reach the humor of TOY STORY franchise and MONSTERS INC., magic of INSIDE OUT and RATATOUILLE, or the heart of WALL-E and UP. Still, FINDING DORY (outside of TOY STORY sequels) represents Pixar’s most successful sequel to date. Its existence ends up feeling more deserved than (the regrettable) CARS 2 and (the still enjoyable) MONSTERS UNIVERSITY. It doesn’t bother with repeating gags from the first film, trusting its story and new supporting crew to carry the film. The story stands on its own, even if it’s not peak Pixar.

Pixar entrusted DORY in the hands of director Andrew Stanton, who has earned that trust and more. Outside of DORY, Stanton is the man behind WALL-E (my favorite Pixar film), FINDING NEMO, and A BUG’S LIFE, and the key writer on the TOY STORY franchise and MONSTERS INC. Stanton’s record maintains its prestige with DORY, a finely crafted film. DORY also introduces Angus MacLane, a longtime animator at the studio who is making his co-directorial debut.

DORY mimics what worked so well for the TOY STORY sequels, which is introducing newer and quirkier characters that make the journey feel fresh. To its credit, I’d argue that the supporting characters are just as fun as FINDING NEMO’s. There is also a moment of slow motion genius near the films climax (you’ll know when you see it). Ultimately, if you have liked most of Pixar’s movies, DORY promises to reward you. It is a crowd pleaser for kids and adults alike, even if it’s clear that it doesn’t fit into the pantheon of Pixar’s best. 3 out of 4 stars
Posted by Joseph Anthony at 12:00 AM