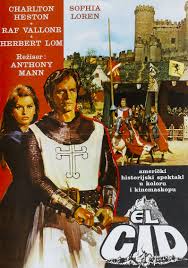 A 1961 medieval epic from the old days, when roving “international co-productions” mean giant, on-location shoots in venues such as Italy or, in this case Spain, EL CID does fall in with all the era’s Biblical spectacles and torn-from-the-pages-of-history kitsch in which part of the goal was the movie industry trying to be ever bigger and bolder and brighter-colored than its nasty little cheap, B&W competitor, television. Given that, however, director Anthony Mann’s eye-filling costumer does have some pretty resonant elements for the present day.

Later NRA figurehead Charlton Heston, a guy able to do larger-than-life with no problem who practically became synonymous with oversized, super-sized and cutting-edge-of-widescreen narratives (lessee, THE TEN COMMANDMENTS, THE AGONY AND THE ECSTASY, BEN HUR, A MAN FOR ALL SEASONS, KHARTOUM, PLANET OF THE APES, EARTHQUAKE…sorry, liberals, the guy rocked) stars here. In war-torn 11th-century Spain, stalwart warrior-knight Rodrigo (Heston) runs afoul of the royal family again and again because of his inflexible Christian-based ethics and nobility.

He captures Islamic Moorish princes raiding Christian towns and, instead of handing them over for ignoble execution, frees them, earning the Muslims' respect and loyalty. Rodrigo suspects the new King Alfonso contrived the assassination of his brother over the throne, and is exiled as a result.

Rodrigo even slays the father of his bride (Sophia Loren) in a duel over honor, casting a shadow over their marriage. It’s said that Heston and the sultry Italian screen siren did not get along well at all on the sight, and the discomfort spills into their tense scenes together, in a good way. .

Rodrigo's growing reputation in exile as `El Cid,' a wise leader, wins him an army of followers, and attracts his old Moor friends to his side, in defense of Spain against a new threat, a barbarously crazed Arab conqueror Ben Yussef (Herbert Lom) sweeping in from Africa killing people left and right.

Rodrigo is no friend of arrogant and contentious King Alfonso and is implored to overthrow the scoundrel and crown himself king. Yet the righteous El Cid, for the greater good, places himself in the service of the royal heir and sacrifices himself for Spain in final battle against Ben Yussef, a bizarre denouement that will sate those of you who like their history-geography lessons served with a few pages of Ripley’s Believe-It-Or-Not, as I did.

The battle scenes featured thousands of extras on loan from infamous fascist Generalissimo Francisco Franco's army. It’s impressive indeed to know these guys are definitely not CGI, and the effect is rousing and the costumes and pageantry is sumptuous, EL CID's stately pace does get rather long (the film was shown originally with an intermission) and the castle skullduggery a little tedious. Still, in terms of a faith-based, upstanding hero placed in impossible situations, Rodrigo is as strong a role model as they come (unless you count the parts when he kills people over "honor").

The second half of the film has him urged to usurp an obviously unworthy monarch in a time of crisis, or stay loyal to the Crown, no matter the weasel wearing it. One could relate that in modern terms, to the idea of supporting an unpopular and wrongheaded president or leader in a crisis on the principle of respect for the Oval Office. One wonders why Heston in real life didn’t work harder to put that message across when a Jimmy Carter or Bill Clinton or even – horrors! a Barack Obama was under fire from media-hogging conservatives. Or maybe, with this film, Heston had felt he’d done it.

(Or maybe he was just another pretentious Hollywood phony like most all thespians, not living by or possibly even comprehending the rich lines he recited. I would hope not, though)

And it doesn't hurt the drama's 21st-century relevance that Islamic-fundamentalist Ben Yussef looks just like the Taliban. The message that there are good Muslims as well as bad Muslims (and lousy Christians as well as upright ones). See EL CID on the big screen if you can, as an entertainment, and think about it if you can do that too. Oh, it's an election year; what are the chances? (3 ¼ out of 4 stars)
Posted by Charles Cassady Jr. at 7:33 PM