Tale of Tales (opens May 6th at the Capitol Theatre)


[TALE OF TALES opens in Cleveland on Friday May 6th exclusively at the Capitol Theatre.] 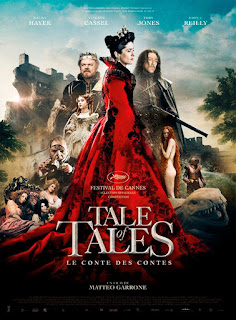 Even in their watered down, Disney-fied versions, fairy tales can get pretty dark. In fact, Disney’s SNOW WHITE has been credited with influencing that country’s take on the horror film, in particular Dario Argento’s SUSPIRIA. Go back to early written collections of fairly tales by the Brother’s Grimm and Charles Perrault, and the tales get even darker.

Go further back yet and we find ourselves in Italy once again. That’s where Italian poet and courtier Giambattista Basile collected some truly horrific versions of fairy tales both familiar and not in what he called "The Tale of Tales, or Entertainment for Little Ones".  The new anthology film adapted from Basile’s book, TALE OF TALES by Italian director Matteo Garrone, is most definitely not “Entertainment for Little Ones”.

The film adapts three lesser known (at least to most Anglo audiences, I would imagine) stories and cuts between them, with occasional interconnections. The first story involves a queen (Salma Hayek) who so desperately wants a child she is willing to send her hapless husband the king (John C. Reilly) off to fight a sea monster. She needs only to eat the creature’s heart (after it is first cooked by a virgin) to become instantly pregnant, a necromancer (Franco Pistoni) assures her.

Indeed, the Queen not only gets pregnant, but carries the child to term in one night. Sadly, the king dies killing the sea serpent, which doesn’t bother the queen nearly as much as the fact that the virgin cook has also given birth to a magic child, a twin to her own (Christian and Jonah Lees play the twins). Her son prefers the company of his twin to that of his mother, and her jealousy inevitably leads to misfortune.

The other tales involve royalty as well, with a lecherous king (Vincent Cassell) falling for an old woman magically transformed into a young beauty (Hayley Carmichael and Stacy Martin, respectively), and yet another dimwitted monarch (Toby Jones) who is more interested in his giant pet flea than his own daughter, who he winds up marrying off to an ogre.

This is the kind of film that can best be described as “sumptuous”, shot on stunning locations with a cast dressed in the finest period costumes, and as often is the case in Italian films, the country’s actual castles serving as the kind of sets and scenery you just can’t make on a computer. Some nice practical special effects bring the sea monster, giant flea, and other monsters to life as well.

The overall tone of the film is very much in the vein of seventies European fantasy films that sort of straddled the line between arthouse and exploitation by adding in a generous dollop of eroticism, notably those of Polish auteur Walerian Borowczyk,(IMMORAL TALES, THE BEAST). The film is unapologetic in embracing fantasy and eroticism wholeheartedly, and is not the least bit concerned with realism. It is all the better for it. 3 ½ out of 4 stars.
Posted by Bob Ignizio at 12:29 PM