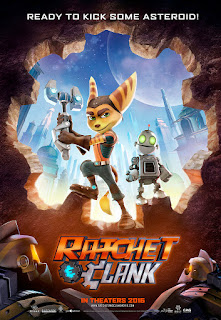 I’ve been a huge fan of the Ratchet & Clank video games since the original came out on the Playstation 2 back in 2002. It was one of those rare games that was not only fun to play, but the little scenes between the gameplay sections were hugely entertaining as well. The characters, the plot, the humor – all were on a par with all but the absolute best CG animated movies I’ve seen. So Ratchet and Clank seemed like a natural to make the jump to their own big screen adventure.

The plot of the film goes back to the original Ratchet and Clank game to tell the origin of how this unlikely duo – a weird anthropomorphic cat thing named Ratchet (James Arnold Taylor) and a defective robot named Clank (David Kaye) – came together to save the universe from evil businessman Chairman Dreck (Paul Giamatti), who wants to blow up several planets and reuse the pieces to make a new one of his own since his race has poisoned their original homeworld. They figure their best bet is to team up with intergalactic hero Captain Quark (Jim Ward) and his space rangers. But Quark turns out to be a vain idiot willing to sell out to the bad guy, so it’s up to R & C to take matters into their own hands.

Since there’s also a tie-in game that updates the same story for the new Playstation 4, this is really more of a reboot/remake than a straight adaptation, though, which means things have been tweaked. And not for the better.

The story has been dumbed down, and both new characters and favorites from later games have been added to the mix, serving only to clutter things up and detract from the story and humor that made the original game so entertaining. In particular, trying to shoehorn the villain Dr. Nefarious (Armin Shimerman) into this story only serves to make the other villain, Chairman Dreck, pointless and redundant.

On top of all that, in what may be the height of laziness, both game and movie utilize much of the same footage. I don’t know from which source the footage originated, but one way or another some major recycling is going on. So if you’ve already played the game, which is more in depth and better captures the spirit of the original series, you are to a large degree paying to see cutscenes from the game on a big screen. There’s some original material (I’d guess it’s about half and half), but none of it is all that good. So gamers, stick with the game. Everyone else, avoid it like the plague. 1 out of 4 stars.
Posted by Bob Ignizio at 12:00 AM