Rambo: First Blood Part II (May 21 at midnight at the Capitol Theatre) 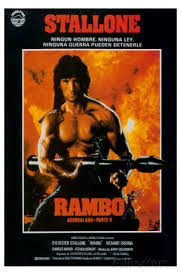 The sequel to the hit Sylvester Stallone actioner FIRST BLOOD (based on a decent David Morrell novel; check it out sometime) was a far bigger, farrrr dumber and more financially successful action-blockbuster that opened in 1985 on a then-record number of movie screens. It couldn't help but make money with those odds, but in that era of Cold-War-bodybuilder-action-violence right-wing Aryan fantasies, it was a monster hit at the box office. Or "monstrous hit," depending on your political outlook.

John Rambo (Sylvester Stallone) was a fairly human-sized outcast Vietnam vet vagrant, tormented and bullied by small-town cops in the first film. This outing finds the muscleman combat-hardened supercommando brought out of prison to earn a possible presidential pardon. Rambo has 36 hours to be air-dropped into communist Vietnam and seek evidence surviving American POWs are still being held captive. But his superiors - yuppie white-collar executive types only interested in a coverup - don't expect him to succeed.

When Rambo (being invincible) does indeed find an active POW camp that's held the poor G.I.s for 20 years, the treacherous American elites deliberately abandon our protag to evil Russian and Viet Cong forces, and Rambo has to fight his way free - mostly without his shirt, muscles gleaming like an oiled up bodybuilder, amidst giant fireball explosions.

"I just saw RAMBO; next time I'll know what to do," famously said President Ronald Reagan (after some terrorist strike got the better of us; the beloved Reagan's "war" on Islamic terror in the 1980s, usually amounting to troop retreats and pullouts, makes Barack Obama look like Gen.George Patton), conferring a White House blessing on this popular hit that was an action smash. One world-traveler said Stallone-with-a-gun posters were in every country he visited when this came out (I was travelling myself; I mainly saw Schwarzenegger or Chuck Norris with a big gun). John Rambo, such a tragic figure in the first movie that the initial script called for him to die in the end, got peddled aggressively as a Tarzan/Davey Crockett/G.I. Joe combo to 1980s kids, soon showing up in a weekly cheapie Saturday morning TV cartoon (animated in the orient for cheap, needless to say).

RAMBO: FIRST BLOOD PART 2 is cartoonish, but for all the wrong reasons. When director George Pan Cosmatos shows the unstoppable Rambo (he just ignores bullets fired his way half the time) kill a whole Soviet patrol one by one, in a different camouflage disguise/gimmick one edit to the next, you remember Bugs Bunny doing stuff like that to Elmer Fudd or Daffy. Tie-ins with Vietnam-War reality, and the melancholy claim maintained by rumormongers and conspiracy-thinkers, that US POWs still languished in enemy hands, makes a distasteful mix, if you take it seriously. Overly-simplistic message: the US military  - in Rambo's case, ONE warrior - could have won Vietnam, or any conflict, as long as "they" (who? Liberals? Democrats? Jews? Jane Fonda? Freemasons and Illuminati?) didn't sabotage the effort.

For what it's worth, James Cameron, of all people, worked on the script. Certainly here and there his admirers can detect the mistrust of authority and corporate-military-industrial complexes that have resurfaced in his megahit ouvre, but really, this isn't one of his best.

In fact, right before RAMBO: FIRST BLOOD PART II came out there was UNCOMMON VALOR, another movie about a rogue mission to rescue longtime Viet Cong POWS, that actually handled the cherished patriotic urban-legend idea with greater realism, better scriptwriting (thanks to Hollywood Republican John Milius) and a strong acting, led by distinctly non-muscleman Gene Hackman. In a smarter America, Ronald Reagan would have learned his lessons from UNCOMMON VALOR and let RAMBO just be rainy-day babysitting material for gun nuts and Oliver North's radio listeners. (2 out of 4 stars)

Posted by Charles Cassady Jr. at 2:13 AM