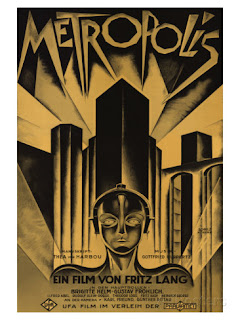 I have to confess, I haven’t seen this particular “2002 restoration” of Fritz Lang’s classic METROPOLIS. For those of you smart enough to know that movies go all the way back to the 20th century, you may be aware that various editions of this 1926 German Expressionist science-fiction spectacle have circulated, some missing about a half-hour or more of footage.

The long, long film was typically cut to pieces by unscrupulous theater owners to more comfortably fit their timetables. Director Lang, fleeing the Nazis for a Hollywood career, didn’t exactly have the opportunity to pack all his reels in the luggage. When Berlin was bombed during WWII, copies of what would have been considered the “original” METROPOLIS all wound up destroyed. From time to time a new alleged restoration of the film would show up – a famous 1984 colorized one from composer Giorgia Moroder using still photos as storyboard bridges to fill in the gaps in the missing chapters.

But it was in the early 21st century that (in addition to all the jobs going to China, the middle class getting exterminated and the prospect of a good life being stolen from all but the top two percent of rich people (oh, happy graduation season, by the way (good luck paying those student loans with part-time minimum wage McJobs (if you’re even lucky enough to get one (being the son or daughter or niece or nephew of a company VP might help; I hoped you all planned that))) a copy of METROPOLIS more complete than any other extant surfaced in South America.

(Now, what are the chances that the late, great SF/fantasy buff David Massaro, Cleveland’s answer to Forrest J Ackerman, probably had a print of the authentic, complete METROPOLIS on one of his cluttered shelves – how well I remember his residence - all this time, but nobody paid attention to him about it. (typical Cleveland situation (just like nobody in the real world will pay attention to your resumes and employment applications, grads (or did I mention that already?))))

As I say, I haven’t seen the 2002 re-issue. I really want to someday, really; with older prints of METROPOLIS in the public domain, this one gets a heavy circulation on video and I tend to watch it every few years, ever since seeing METROPOLIS for the first time on former Clevelander Stu Levin’s Old Movies: The Golden Era on WVIZ back in the 1970s. If you too mainly know the epochal fearture from fuzzy, 3rd-generation dupes, you really, really owe it to yourself to behold a pristine version on the bigscreen.

METROPOLIS indeed was the earliest and still one of the best of all moviedom’s visionary,
ruinously overbudget sci-fi film spectaculars. The 1926 original production was famously said to have been inspired by helmer Fritz Lang's first youthful glimpse of Manhattan island by night. He worked with then-wife Thea Von Harbou on the script (and a major side treat for fans, if you can find it, is Von Harbou’s recently published illustrated novelization, which fills in some of the background).

In the story the year is 2026. In a giant, art-deco modern city called Metropolis, hordes of dispirited, drone-like workers in identical coolie-like uniforms toil at huge machines underground so that the wealthy elite can party in glittering splendor on the surface.

The Master of Metropolis, a man named Trump (okay, just kidding about that last phrase) schemes to
disgrace an upstart “girl of the people” worker activist-priestess-humanitarian named Maria (Brigitte Helm) by having semi-maniacal, one-handed renegade scientist Rotwang (Rudolph Klein-Rogge) create an evil robot/android in Maria’s image, to lead the downtrodden disciples into an ultimately doomed revolt. Hey, wait! If the workers are all decimated, that would also bring down the ruling classes who rely on them, right? Who would believe such an idiotic premise. Why, that’s like…destroying the American middle class by shipping all their jobs overseas and bringing about utter economic ruin. How ridiculous is that? Oh, yeah, happy graduation time, all of you. Or did I say that already?

The German production company UFA was quite bankrupted by Lang’s largesse, and the epic’s wildly ambitious mix of medievalism, futurism and Marxist humanism (capital vs. labor) wears the emotions with such a broad swath that I was given to understand that this high-tech fable had ardent fans in both Adolph Hitler and Josef Stalin (so when your film professor made you watch it, what did that make him/her? Just another little message for you graduates. Hope that tuition money was well spent).

But it’s still mighty to behold and – even without Real3D - takes the cinematic experience to the limit, in my humble opinion. Lang uses human beings as graphic elements throughout, while the sets and costumes (or, in Brigitte Helm’s sensuous night-club dance, lack of costume) gave the silent screen a gallery of sights that compare well to all the CGI now extant. The Maria-to-robot transformation sequence is still a standout that has few equals in the SF genre (although I can’t imagine a better done version of it than the one Giorgio Moroder set to music).

Good luck graduates. Watching the subterranean slaves in this movie working as living circuit breakers and switches, getting thrown out like blown light bulbs when they’re worked to death, probably gives some idea of the opportunities you’re looking at. (4 out of 4 stars)

Posted by Charles Cassady Jr. at 1:48 AM