High-Rise (opens in Akron May 13th at the Nightlight Cinema. Screens May 19th and 22nd at the Cleveland Cinematheque.)


[HIGH RISE opens in Akron on Friday May 13th at the Nightlight Cinema. Screens Thursday May 19th at 8:20 pm and Sunday May 22nd at 8:05 pm at the Cleveland Cinematheque.] 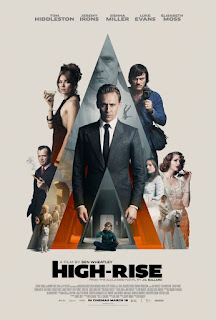 HIGH-RISE opens in what looks like a post-apocalyptic wasteland out of a ROAD WARRIOR movie in which our protagonist, Dr. Laing (Tom Hiddleston) walks unaffected through squalor and carnage to reach his balcony, where he roasts a dog leg over an open fire. We then flash back 3 months prior and discover this is not some dystopian future, but rather England in the 1970s. What could possibly have driven the residents of the swanky apartment building built by Anthony Royal (Jeremy Irons) into such savagery?

Based on the novel by J. G. Ballard published in 1975 and set in more or less the same time, Ben Wheatley’s film certainly captures the look and feel of that era’s pop art cinema. The retro-futuristic set design looks like something out of Radley Metzger’s CAMILLE 2000, and the lighting and color palette feel era appropriate as well. The problem is, one of the film’s central themes, of how living in the isolated environment of a high rise apartment building might negatively alter the psyche of those living there, seems just as retro. Only not in a good way.

At this point in history it seems safe to say that apartment living, in and of itself, isn’t nearly as dehumanizing as this film depicts. Sure, some of this is exaggeration for effect, but for the most part the movie plays it too straight. It wants us to genuinely buy into the notion that simply living in a high-rise is enough to make everyone go all Lord of the Flies, and that's a bit much to swallow.

What does still resonate is the commentary on social class. The 40 story apartment complex is divided into three levels roughly corresponding to the working class, middle class, and upper class, with the none-too subtly named Royal shakily ruling over his stratified domain from the penthouse. Because these groups stay loyal to their own tribe rather than working together, the collapse of their society is all the more sudden and severe.

In his blog post on the film, Tim Lucas points out the similarities to Luis Bunuel’s 1962 THE EXTERMINATING ANGEL. That film actually preceded Ballard’s novel by a good decade in showing a world in which isolation breeds madness, particularly among Bunuel's favorite target, the bourgeois. There are also some strong parallels to David Cronenberg’s SHIVERS, released the same year the novel was published. That film’s protagonist was also a doctor living in a state-of-the-art apartment complex whose residents go off the deep end.
As visually stunning, compellingly acted, and well-made as Wheatley’s film is, there’s simply nothing in it that makes as strong or lasting an impression as either of those two precursors.  That’s not to say it’s a bad film, but it’s by no means an essential one, either. 2 ½ out of 4 stars.