Far From Men (now on video) 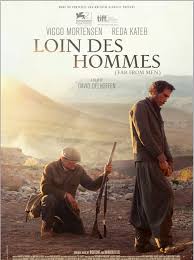 All hail Viggo Mortenson as the American answer to Max Von Sydow, that is to say, a serious and thoughtful-seeming actor who can go from all-star escapism and fluff such as HIDALGO and the LORD OF THE RINGS films to way off-the-beaten-track foreign fare, personal projects and “art” films. Now watch, Mortenson will show up as a cartoon bad guy or cape-wearer in a Justice League movie, shaking his fist and saying “I’ll get you Wonder Woman!” and I will be begging Bob Ignizio to take down this posting. Or at least put his own by-line on it. I’m so sick of comic-book movies.

The multi-lingual Mortenson stars and co-produced (for iconic French studio Pathe) the French- and Arabic-language drama FAR FROM MEN, which represents director David Delhoffen’s decent expansion of the Albert Camus short story “The Guest,” on which generations of high-school students such as I had been weaned (to all my fellow former high-school French students, anyone found any jobs out there? I’m still looking).

Unlike similar attenuations of short-story material, this one doesn’t feel terribly padded, even if it does bring some sex and more violence into the tale than Camus did.

Setting is Algeria in 1954, against a backdrop of guerilla war waged by native Muslims against French colonials. Insurgents are indiscriminately picking off French citizens, and a well-liked, dedicated rural French schoolteacher named Daru (Mortenson) is told by the local French-colonial defense militia to take an young Arab, Mohamed (Reda Kateb), accused of murdering a cousin, to his trial and sentencing in the nearest sizable city.

Daru wants no part of any assigned role of authoritarian prisoner transport, and he tries to set the stranger free. But Mohamed is determined to go through with his ordeal under French authorities. He would rather be sentenced under westerners rather than face the rougher justice of his Islamic countrymen, because his family is too poor to pay the required “blood money” to let him off easily.

The reluctant journey of Mohamed and Daru together, shown in long, meaningful widescreen takes in a harsh, foreboding landscape, and it reveals hidden truths in the pasts of both men and muddles the status of captor and captive. For viewers generations removed from Camus and his (take a shot if you have a drinking game every time this word comes up) existentialism, the script also messes around with what constitutes a definition of a "terrorist." Yes, I don’t believe FAR FROM MEN will soon be seen at any Bush-Cheney family gatherings, nosiree.

It’s strong item, well done by all, though arguably about ten minutes too long, but still worth seeing. I guess if I really thought about it, John Malkovich might also be one of those tough-to-pigeonhole actors whose careers move easily from mainstream schlock to more daring material, but I dunno, appearing in ERAGON was pretty unforgivable. (3 out of 4 stars)