[DAZED AND CONFUSED screens Saturday May 7th at 9:35 pm and Sunday May 8th at 8:45 pm at the Cleveland Cinematheque.] 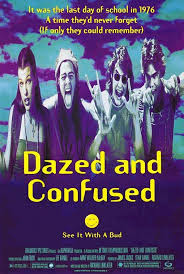 It’s understood now that cinema is degraded to being mainly a vehicle for the delivery of comic-book superhero adaptations, and that’s about it. Film had a good run for about 100 years, but that’s all it’s come down to now, live-action comic-book superhero adaptations. Maybe some video games too and cartoons too. But the point is, we’ve already had like three or four Spider-Man “reboots” already. Alternating with X-Men and Transformers. That’s what movies are all about.

So it just follows that the comic-book movie most associated with Cleveland is years overdue for a reboot/remake as well. And no, I’m not talking about HOWARD THE DUCK, or even THE AVENGERS. I’m talking AMERICAN SPLENDOR, the revered film version of Harvey Pekar’s diary-style comics.

A reboot/remake/update/prequel/sequel/next-generation of AMERICAN SPLENDOR would have all the advanced CGI stunts, backgrounds and creatures that just weren’t available with the technologies extant in 2003. It would capture a younger, more demographically desirable audience of patrons, such as internet-savvy Millennials who never saw the first AMERICAN SPLENDOR, given that they won’t watch “old” movies (basically anything made before MEET THE FOCKERS hurts their eyes).

And, as much as Paul Giamatti did an okay job playing Harvey Pekar (and so did Harvey Pekar himself, in a few scenes), he just didn’t capture the angst of 20 year olds that are a target audience. Imagine the new Harvey Pekar and Joyce Brabner, portrayed by, say, Ryan Reynolds and Jennifer Lawrence. Or Kevin Hart and Lady Gaga. Or Duane `The Rock’ Johnson and Miley Cyrus. Toby Radloff could still play himself (except in extensive flashbacks, where he is performed by the entire lineup of One Direction).

Are you all ready to go Syria now for Jihad? There is one good, valid reason, however, to make a second screen run at Harvey Pekar’s material, though; it would give director Richard Linklater a prospective crack at it.

Linklater, of course, is the Austin-raised filmmaker whose mostly dialogue-driven, quirky comedies turn heavily on great ensemble casts and seemingly freeform, off-kilter scripts, in which nothing seems to happen, while everything happens. Linklater’s mise-en-scene and Pekar’s short panel strips - often little more than illustrated verbal exchanges between Harvey and his friends, or just Harvey in soliloquy - would make a good fit, I rather think. Prime evidence being Linklater’s plotless WAKING LIFE, whose computer-assist cartoon rotoscoping really does have the sense of a grownup graphic novel come alive.

Linklater has never left his original SLACKER muse behind, as evidenced by his 1993 cult hit (meaning it was a box-office disappointment at the time) DAZED AND CONFUSED.

Setting is 1976 suburban Texas, on the last day of school/first day of summer vacation. A bunch of matriculating middle-school boys try to dodge the sadistic hazings of the high-school upperclassmen (a detail that’s only gained in impact with “bullying” a hot-button issue lately). Their chief tormentor is played by a before-he-was-famous Ben Affleck. Meanwhile, girl students are subjected to humiliation rituals by alpha mean-girl cheerleader Darla (Parker Posey).

Meanwhile, a marijuana-loving set of senior-level friends have more existential issues. Randall `Pink’ Floyd (Jason London) is the school quarterback who has no problems hanging out with the intellectual-stoner clique, mostly to smoke pot and chafe at the predetermined path to law school his family’s laid out. He’s also resentful of a sort of morality “contract” being circulated by his coach; he’s expected to sign, and one of its major platforms is total abstention from dope.

The various kids converge ultimately at an all-night booze-and-reefer bash in the woods, very much against curfew. By the break of dawn there’s a mild sense of a turning point in some of these young lives, a little, perhaps, maybe.

Linklater, also scripting, nails the time-period milieu, just as he does in this year’s 1980s-themed EVERYBODY WANTS SOME (it’s fairly obvious he’ll go the “trilogy” route, with an ensemble comedy-drama piece set in the 1990s at some point). There are near-nonstop clips of contempo pop music – Foghat, Aerosmith, Black Oak Arkansas – and bell-bottomed pants, macramé, and teachers who are still preaching left-wing hippie gospel in class about George Washington and the founding fathers being slave-owners and don’t fall for that Bicentennial stuff (later one of the students echoes the idea his own way, with a hilarious monologue about George and Martha Washington as groovy pioneering drug farmers).

I have to tell you, I was around and aware in this era. And while I never got invited to any of those parties – because I had no real friends, on account of I was the sort of kid who would have eagerly signed that abstention contract, fat lot of good it did me later in life – I can pretty much vouch for the atmosphere. Fans of DAZED AND CONFUSED have compared it to nothing less than AMERICAN GRAFFITI for its evocative vibe, soundtrack, and array of bright young talent (including Milla Jovovich, Joey Lauren Adams, Anthony Rapp and Matthew McConaughey). I would not go that far, not at all. But it still has some truths to offer that transcends superficial notions of most druggy teen-baiting comedies one could name.

Like I say, watch it, and ask if Richard Linklater isn’t an apt choice for another visit to the well of material Harvey Pekar left behind. It’s fun to think about, anyway. Even sober. (3 out of 4 stars)
Posted by Charles Cassady Jr. at 2:47 AM