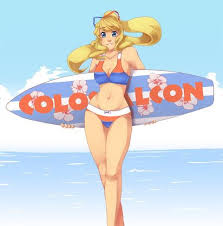 Don't dare call them mere cartoons. To its cultish fandom, this medium is known as "anime." Their creators, like Hayo Miyazaki, Yatoshi Kon and Osamu Tezuka, are considered geniuses on the level of Chuck Jones and Walt Disney. Movies like SPIRITED AWAY and AKIRA and series such as Cowboy Bepop and Ranma 1/2 are considered classic achievements. And their dedicated/demented fans go by the Japanese term "otaku."


These people take their anime seriously. For example...When was the last time you saw crowds participating in Bugs Bunny lookalike contests? Or ruthlessly competing in Popeye trivia? Or paying big money for rare LILO & STITCH material, downloaded from the internet off bootleg Far East laserdiscs and edited and translated by obsessed fans in home computers?

But those are the sort of things that go on at an anime fan-convention. And the 15-year-old ColossalCon, in Sanduskys Kalahari Resort and Convention Center, includes a "cosplay" costume contest (that will explain any the life-sized Pokemon or Sailor Moon characters you see walking around), dance games, artistic exhibits by fans who illustrate in distinct style of GHOST IN THE SHELL, MY NEIGHBOR TOTORO, FIST OF THE NORTH STAR and other Japanese-animated classics, going all the way back to TV's Speed Racer and Astro Boy.

And, because the Kalahari is an all-weather water park, many of the ColossolCon-goers do indulge in trying to bring to life, as best they can, the notorious "fan service" element of anime, which amounts to huge-eyed nubile girls (sometimes boys) spilling out of skimpy swimsuits or cosplay harem-bikini costumes around the pool. In the manga and anime, frequently, this sets the stage for molestation by long-tentacled monsters. American cosplay has yet to progress to that extreme. Maybe under President Trump it will.


ColossalCon takes place in Kalahari Resort and Conference Center (which is sold out at press time; walk-ins only, sorry!) off SR 250 in Sandusky. The price of admission is  $20 on  Thursday, $35 on Friday, $38 on Saturday and $22 on Sunday  or buy a show pass for $60. Otaku and wannabes can find a full schedule online at http://www.colossalcon.com.