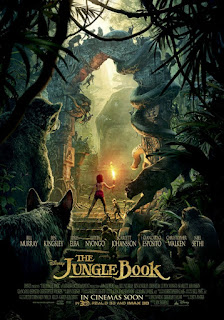 THE JUNGLE BOOK is a fanciful telling of Rudyard Kipling’s book of the same name. It’s not the first time that someone has turned it into a movie, but it’s my favorite. In a world where a giant orangutan lives in an abandoned jungle temple, and every leaf on every tree a special effect, I imagine it would be a slippery slope for moviemakers to take shortcuts, leaps of judgment or think they could get away with cheating the audience. But they didn't. Every fake tree, every talking critter, every detail was treated with respect and seriousness – even when the story took dark turns, much deeper than the original Disney version in 1967.

Unlike that animated version, this version directed by Jon Favreau (IRON MAN, ELF, CHEF) is realistic “live-action.” I’m making air quotes with my fingers as I write “live-action” because there isn’t much live filming in the movie. Not even the landscapes or backgrounds are real. I watched this movie in 3-D, and while there were not as many gimmicks as one expects from a 3-D experience, the technology did build beautiful texture and layers to the jungle and it’s characters.

Each piece of this jungle was carefully crafted with its own light, own colors, own species. More fun that just exploring the different parts of this jungle is the breakneck speed at which the journey carries audiences from one watering hole to a patch of jungle thicket. The pace of the movie followed suit, swift and energetic.

This JUNGLE BOOK telling is much darker than the children’s versions of the same story. Favreau’s story is certainly for adults. There is some homage to the more jolly 1967 kids’ version – there are two song snippets in this one.

Seriously, talking animals with the voices of famous people could have been creepy. But, again, the seriousness and sensitivity of the moviemakers prevailed. In the entire 105 minutes of talking animals, not one time did the characters ever strike me as cheesy or tawdry. That’s kind of a major success on its own.

The one live-action actor in the movie is 12-year-old Neel Sethi as Mowgli. In his first feature film, Neel is a charming and strong little man-cub. Stranded in the jungle as an infant, Mowgli was raised by wolves. The story opens with Mowgli struggling to keep up with the other wolves in his pack, in spite of his best efforts and the love from his fellow wolves.

But when the jungle villain, Shere Khan the tiger, sniffs Mowgli out his wolf pack can no longer protect him. Shere Khan’s anger towards Mowgli is a timeless narrative – humans, even those with the best intentions, can be dangerous to the animal kingdom. Even if Mowgli knows nothing of the human culture he came from, is he still an inherent threat to the jungle?

The story is captivating, dark, and never campy. THE JUNGLE BOOK is a fun adventure. 4 out of 4
Posted by Candice Lee at 12:00 AM