The Club (April 7th and 8th at the Cleveland Cinematheque)


[THE CLUB screens Thursday April 7th at 9:10 pm and Friday April 8th at 7:30 pm at the Cleveland Cinematheque.] 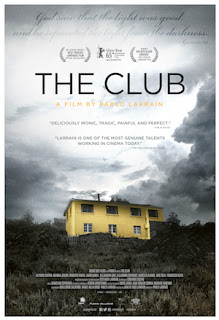 Membership in director Pablo Larrain’s THE CLUB is exclusive, but not especially desirable. The members are all former Catholic priests: Father Vidal (Alfredo Castro is probably a pedophile (he admits to the urges, but claims he keeps them under control), Father Ortega (Alejandro Goic) kidnapped “unwanted” babies and gave them to homes he deemed better, army Chaplain Father Silva (Jaime Vadell) was complicit in war crimes of some kind, and Father Ramirez (Alejandro Sieveking) is too senile to remember what he did, and whatever records might have existed on the man are missing. These men have been sentenced by the church to live out their days in an austere house on the Chilean seaside, watched over by a former nun (Antonia Zegers, wife of the director) with a checkered past of her own.

While their lives are hardly ideal, things could be worse. Some of the rules they have to follow are strict, but at least they have a winning pet greyhound who they hope to get into some sort of national championship, and their lives are more or less quiet and uneventful. That all changes when a new member joins the club, pedophile Father Lazcano (Jose Soza).

Shortly after the defrocked predator moves in, one of his victims, Sandokan (Roberto Farias), shows up at the house and loudly tells anyone within earshot what was done to him. Unable to take the confrontation, Father Lazcano shoots himself in the head.

The suicide results in the Vatican sending Father Garcia (Marcelo Alonso), who views himself as a representative of the “new” Church, to assess the situation. Garcia is frustrated by his inability to get the whole story of what happened. Nor is he happy that these men who he views as criminals are, in his mind, treating their exile more like a vacation than punishment. As Garcia’s investigation continues, things eventually come to a head.

While it’s fairly certain Larrain has no love for the Catholic Church as an institution, he doesn’t portray any of his characters as outright evil. They don’t come across as particularly sympathetic, either, but they all at least manage to retain some humanity. Father Garcia manages to simultaneously strike the figure of both crusading reformer and uptight bureaucrat, but despite his talk of a “new” church, when it comes time to circle the wagons he doesn’t hesitate to take extreme measures to insure the old establishment comes to no further shame.

So yeah, this one probably wouldn’t get the Legion of Decency seal of approval. And yes, I know technically that’s not still “a thing”, but it has a better ring to it than the group’s successor, the United States Conference of Catholic Bishops' Office for Film and Broadcasting.

THE CLUB also has some genuinely uncomfortable moments, particularly Sandokan’s graphic recounting of what was done to him, and some scenes of animal cruelty that are hard to watch. For those who can handle it, though, it’s a powerful film that packs far more of an emotional punch than this year’s solid, if by the numbers, “Best Picture” Oscar winner SPOTLIGHT, which dealt with some similar themes. 3 ½ out of 4 stars.
Posted by Bob Ignizio at 12:00 AM