Network (through April 7 at the Nightlight in Akron) 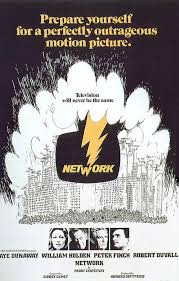 Sidney Lumet's scathing multiple Oscar nominee NETWORK is the movie that predicted the advent of `trash TV.' This being the 1970s, pre-AIRPLANE!, its satire is not a bellylaugh parody but rather a stern, grownup Swiftian broadside, shock-and-awe dialogue still capable of making the pulse quicken, even if some of the details are hardly farfetched anymore, in the 21st-century tubescape of voyeuristic `reality shows,' sleazycore gossip channels, news sensationalism and circus-freak daytime talk. Kids who come home from school to Jerry Springer might wonder a little bit what the fuss is all about.

But NETWORK bristles with righteous anger, featuring especially caustic dialogue by magisterial writer Paddy Chayefsky, who was one of the great script authors of early television drama. By the mid-1970s he didn't like what he was seeing, and the narrative takes place in a post-Watergate atmosphere of darkest cynicism, homegrown terrorism, Third-World atrocities, oil shortages, inflation, recession, amorality and all-around bad news. Just about every character, even minor ones, gets to do angry oratory that could blister wallpaper.

The network of the title here is a mythical, low-rated, fourth TV channel called Fox...no, just kidding, it's UBS, operated by a giant company called CCA. The order comes to lay off the aging UBS nightly-news anchorman Howard Beale (Peter Finch), newly widowed (sounds like it wasn't a happy marriage anyway; none of them here are). Beale reacts by announcing live on the air that he'll shoot himself on his farewell broadcast.


Afterwards he begs his best friend and longtime producer Max (William Holden) for a second chance to bid a more dignified goodbye. Max is already stung that his news division has been taken from him and handed over to CCA's commercial-entertainment department, under predatory young executive Diana (Faye Dunaway), so he grants Howard's request. This time Beale does a profane tirade about the world being a godless "insane slaughterhouse" and says he just "ran out of bullsit." Both Max and Howard are fired, but stronger-than-usual viewer ratings make CCA put Beale back on the air again and let him rant and rave - as long was people keep tuning in. Max thinks Howard needs psychiatric treatment instead. Beale gets more and more unstable, until he thinks he hears the voice of God (or something) talking to him. In a classic scene (Finch won a posthumous Oscar for his acting) Howard Beale makes an especially crazed entrance into the studio one stormy night, ordering viewers at home to throw open their windows and shout "I'm MAD as HELL, and I'M NOT GONNA TAKE IT ANYMORE!" All across the country, they do.

Now Diana gives "The Howard Beale Show" a makeover as a tacky variety program, surrounding "the mad prophet of the airwaves" with fortune-telling psychics, gossip columnists and a live in-studio audience. Beale's uncensored, apocalyptic speeches are a hit, but when he reveals to the public some dirty secrets about CCA's business dealings, the bosses are suddenly very unhappy.

Max is the jaded protagonist who seems to uphold old ways of basic decency and journalism ethics. Yet when he discovers that Diana secretly idolized him, he leaves his wife (actress Beatrice Straight, who gained a certain notoriety for winning an Oscar over one of the shortest roles ever to get Academy Award gold, just a few scant minutes onscreen) and jumps into an affair with the sexy, divorced, ratings-obsessed programmer who represents everything he detests (on the side, Diane develops a 'reality show' following the adventures of a Communist terror cell). It's a relationship even he predicts will be a disaster, and it is. Somehow, in the bitter what-the-hell milieu, their unlikely fling is more convincing than not. Chayefsky doesn't let the viewer off easy, and the pitiless finale - featuring the only onscreen violence in the film - suggests this is only the beginning of an ugly new era for American television.

Hey, works for me. NETWORK seems especially on on-target about the idea of huge, anything-for-money corporations running the media (and everything else), a pathology that's only worsened since the 1970s. Other aspects are pretty specific to conditions of its time, especially the bizarre detail of Diana's TV pilot starring West Coast Maoist bank robbers trying to overthrow society (a riff on the Patricia Hearst case). You might note that one of the terrorists is played by Kathy Cronkite, who in real life was the actress-daughter of none other than cherished newsman Walter Cronkite. If there were Oscars for inside jokes, that one would certainly qualify.

A must-see, especially if you still haven't bought a digital-conversion box and are thinking of giving up the idiot box altogether. As long as you've got an internet setup capable of loading the Cleveland Movie Blog you have all the media you need. (4 out of 4 stars)

Posted by Charles Cassady Jr. at 3:36 AM