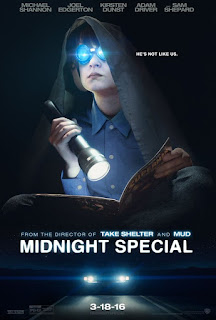 Recent press about MIDNIGHT SPECIAL has drawn comparisons to Steven Spielberg’s earlier sci-fi work. While those comparisons are valid, MIDNIGHT SPECIAL is unmistakably a Jeff Nichols’ film. SPECIAL has the grandeur and emotional tidings of a Spielberg flick, but like his three previous efforts (SHOTGUN STORIES, TAKE SHELTER, MUD), Nichols brings a southern charm that adds calm and charisma to his work.

2013’s MUD was one of my favorites of that year. In my review for that film, I described it as being “funny, tense, romantic, dramatic and even has some action. And while it’s packed with things we love in film, it still moves at a leisurely pace, telling us the story it wants to tell.” With the exception of romance, this description is just as appropriate for MIDNIGHT SPECIAL.


Whether it’s Michael Shannon’s character in TAKE SHELTER struggling to understand whether his fantastical dreams and visions are prophecies or signs of mental issues, or two young boys managing their own personal struggles while taking care of a convict in MUD, Nichols is already a master of his craft when it comes to telling stories of internal conflict. MIDNIGHT SPECIAL is no exception.

Telling the story of a boy named Alton, played beautifully by ST. VINCENT’s Jaeden Lieberher, who clearly possess special powers (the film is not ambiguous on the matter). Many believe he is the difference between the end of mankind and the world's survival. In order to survive he must be delivered to a specific place on a specific date. The issue becomes more complicated when an Amber Alert is issued for Alton and, reported as kidnapped, the FBI begins pursuit. Agent Servier, played by Adam Driver (or known to most as Kylo Ren from STAR WARS), learns during the manhunt that Alton might be legitimately “special.”

The first half of the film is a high-octane piece. The film asks you catch up with the story right as it gets going along a dark highway. We know that whatever the truth may be, it is important that Alton be kept safe, and you find yourself immediately cheering for Alton. More than that, you are also rooting for his so-called captors (in reality Alton’s safekeepers) Roy (Michael Shannon) and Lucas (Joel Edgerton).

Understanding that Alton, who often sports oversized goggles and soundproof earmuffs, is both an innocent child and the product of something more spectacular, you can’t help but feel your nerves rattle as he is moved about the American landscape like some sort of illegal product. He must be kept secret and safe. Even those who believe in Alton as our salvation do not know exactly how everything is going to play out. Roy, Lucas and eventually Sarah (Kirsten Dunst) work solely on Alton’s visions and suggestions, that is, based on faith. It is their faith that brought them together in the first place, as all belonged to a cult-like congregation before setting off on their journey through the deep south.

MIDNIGHT SPECIAL’s conclusion will be the dividing factor for audiences. The ending works fine for me, but I can appreciate those who might feel it’s too much. Two thirds of the film are so finely tuned and written that no matter what, the movie may have written itself into a corner. No matter how it ended, it would have alienated certain viewers. Nichols make his choice and I believe it’s the bolder of the options he had. Regardless, you will have to decide for yourself.

MIDNIGHT SPECIAL is Nichols’ most concise film. Both TAKE SHELTER and MUD (while favorites of mine) contain some excess fat and, at times, feel like that could benefit from a good trimming. SPECIAL tells a large story rather quickly considering the scope of the picture (if you’re to trust Alton’s believers, it essentially has the possibility of being an apocalyptic picture).

Revolving around faith and the relationship between parents and a child, Nichols has said that the film originated when his own son became ill. Nichols had to figure out how to both care for the person he loves most while realizing that he is powerless in some ways to what may come for that same person.

There’s a moment in Nichols’ 2011 film TAKE SHELTER where Michael Shannon’s character stands on the side of a highway and looks on in astonishment at a lightening storm, asking to himself, “Is anyone seeing this?” It’s the same question I ponder after each of Nichols' films. Each film lovingly crafted and each deserving of a wider audience. Take a chance, MIDNIGHT SPECIAL deserves an audience.