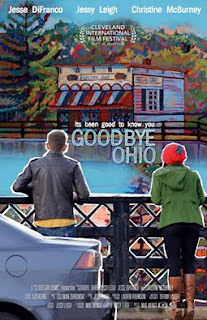 A young woman (Jessy Leigh) is leaving behind her small Ohio town (Chagrin Falls) to chase her dream of being a writer in the big Apple. Before she goes, though, there’s a loose end that needs to be tied up in the form of her ex-boyfriend (Jesse DeFranco). The two meet for lunch at a diner, and it isn’t long before trite small talk gives way to the guy trying to convince his ex-girlfriend not to go.

Co-producer/director Mike Wendt has crafted a solid, professional looking piece. Co-producer/writer/editor/co-star Jessy Leigh gives herself a nice spotlight for her acting talents, and her editing is tight and professional. Her screenplay is a bit too cutesy and on the nose at times, but it also has the ring of authenticity. Co-star Jesse DeFranco acquits himself well, too, although his role doesn’t allow him to stand out quite as much. The end result isn’t exactly what I’d call a “must see”, but it’s a pleasant enough diversion for its fifteen-minute running time that makes a nice little calling card for its participants. 2 ½ out of 4 stars.
Posted by Bob Ignizio at 2:45 PM