[DER BUNKER screens Tuesday April 5th at 9:00 pm and Wednesday April 6th at 11:45 am at the Cleveland International Film Festival.] 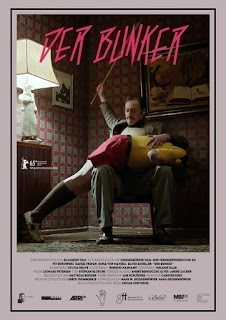 At times, DER BUNKER generates the same kind of quiet mystery and unease as Takashi Miike’s AUDITION. We’re not quite sure what’s going on in the titular abode, where an unnamed father (David Scheller) and mother (Oona von Maydell) live with their overgrown man-child Klaus (Daniel Fripan), but something’s definitely not right. Nonetheless, a nameless student (Pit Bukowski) answering the family’s ad for a room to let moves in. He soon finds himself roped into tutoring duty for young Klaus, who is being groomed for great things by his parents despite obvious mental shortcomings. He also begins an affair with the mother, which seems ill advised given her penchant for breast feeding her adult son and the talking scar on her leg which she claims is really an alien intelligence. So yeah, it’s that kind of movie.

The claustrophobic setting, small cast, and twisted family dynamics played for black humor are reminiscent of David Lynch’s ERASERHEAD and, to a lesser degree, John Waters PINK FLAMINGOS, while the mother’s odd deformity and the general tone of deadpan weirdness recalls Adam Rifkin’s THE DARK BACKWARD. And much like the casts of those films, the actors here totally commit to the odd premise they’ve been asked to inhabit by writer/director
Nikias Chryssos. It’s largely due to that commitment that the film plays as well as it does despite being difficult to get a handle on at times.

Difficult, sure, but not impenetrable.

DER BUNKER seems to be mainly concerned with the unrealistic expectations parents can place on their progeny, the lengths they will go to in order to get them closer to achieving those goals, and the often unhealthy desire to keep seeing their offspring as children even as they enter into adulthood and should be breaking away on their own. Really, it’s a theme one imagines might resonate with a lot of people, delivered in a manner that seems almost calculated to thin the numbers of potential audience members. But that’s Chryssos’ vision, and like his cast he is committed to realizing it in its purist form. Not only does that result in a movie worthy of respect, but a compelling and weirdly entertaining one, as well. 3 out of 4 stars.