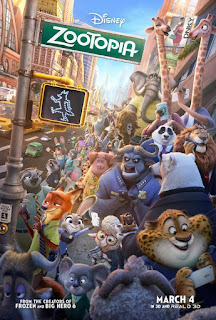 In a world seemingly without humans, animals have evolved to the point that predator and prey live together in harmony. It’s a utopia for intelligent animals. A ZOOTOPIA, if you will (aren’t those Disney folks clever?).

The filmmakers seem quite pleased with their imaginative creation and spend a fair amount of time and effort in “world building”. Just enough to engender questions in the analytically minded such as myself, but not enough so as to offer any answers. Questions like – how are all these creatures using technology when many of them still lack opposable thumbs? And if the film is going to mention evolution in its efforts to explain how things got this way, then what do the predators eat now that they don’t chow down on their fellow animals? Have their digestive systems evolved that drastically that they are now vegetarians? Or maybe that explains why we never see any humans.

As with Disney/Pixar’s CARS franchise, which presents an equally detailed and even more implausible world, it’s probably best not to think about these things. And for the most part, the story and the jokes are entertaining enough that you won’t. Or at least you probably wouldn’t have until I went and brought it up, thus planting the seeds in your head. But I digress. At this point, you’re probably wishing I’d just shut up and give you a plot synopsis. So here you go.

Judy Hopps (voice of Ginnifer Goodwin) dreams of becoming the first ever bunny police officer in a profession dominated by bigger, tougher species like rhinos, elephants, and lions and tigers and bears (oh my). Her determination pays off, but she soon learns that reality doesn’t quite match her dreams. Instead of fighting crime, she gets meter maid duty.

While writing parking tickets, Judy makes the acquaintance of fox con artist Nick Wilde (Jason Bateman). Both of them have been hurt by prejudice in the past, which makes it difficult to trust each other when they wind up working together on a missing persons case that turns out to be an even bigger deal than anyone suspects. It’s the anthropomorphic animal equivalent of 48 HOURS or something along those lines, a buddy picture that puts together a mismatched team of crook and cop to solve a case no one else can.

Beneath the buddy cop plot, the central theme of the film is one about the dangers of prejudice and bigotry. It does this not just in the obvious way, by having a bigoted villain who wants to use a small minority of the population as a political scapegoat, but by showing that even a “good” character like Judy can fall victim to her own prejudices. The movie kind of undermines itself, though, with bits like the Italian mouse (or are they voles?) family whose patriarch is based on Don Corleone from THE GODFATHER.

ZOOTOPIA is, like other recent Disney and/or Pixar hits like INSIDE OUT and BIG HERO 6, a little more geared towards the grownups. That older slant feels even more pronounced here, though, with the plot, standard issue though it may be, considerably more complex than typical kiddie fare. The jokes also skew a bit older, including my personal favorite, an animal nudist colony complete with volleyball players. A joke about old nudist camp movies from the sixties? Yeah, pretty sure that one is going over junior’s head. And it’s hardly the only joke the kids won’t get.

Don’t get me wrong, there’s still more than enough here for older (say 8 and up?) kids to enjoy, and even my 5-year-old seemed more or less pleased with the film. But he wasn’t exactly begging to see it again like he was with BIG HERO 6, or INSIDE OUT, either. Can’t say I’m in a big hurry to revisit ZOOTOPIA, either, but it was at least worth checking out the first time. 2 ½ out of 4 stars.
Posted by Bob Ignizio at 12:01 AM