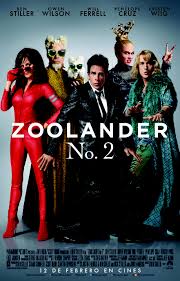 Oh, ZOOLANDER 2. Not long ago it just seemed like a bad internet rumor, just like Batman and Superman in the same big-budget movie, or another ANCHORMAN, or Donald Trump seriously considering a run for president. Now ZOOLANDER 2 is really upon us. That should really be a wake-up call about all that media that forecasts an invasion by flesh-eating living dead sometime in our future. We really have to take care what gets put out there.


Not that ZOOLANDER 2 is terribly bad, by ZOOLANDER standards. It's just difficult to see what more co-writer-star-director Ben Stiller has to bring to the table regarding grotesquely exaggerated fashion-industry freaks and male-model stupidity, crossed with 007 level cartoon intrigue, that the same comic didn't do to satisfaction in 2001's ZOOLANDER in the first place. Well, now there is a scene in which Justin Bieber gets killed, right up front, there's that rather desperate appeal to critical goodwill and wish-fulfillment.

A series of assassination-murders of real-life pop idols (Bieber being the only one onscreen here) is sweeping the world. Meanwhile, male-model superstar Derek Zoolander (Stiller) is revealed, since the last movie, to have become a hermit after a giant charity-foundation school he built collapsed. The incident killed Zoolanders wife and scarred the handsome face of Zoolander's male-model best frenemy Hansel (Owen Wilson).


Billy Zane, one of a series of real-life celebrity cameos (one who didn't do an encore cameo after his walk-on in the last movie: David Bowie) ventures to Derek's remote cabin and talks Zoolander into reconnecting with the world and going in search of his long-lost son. Who was taken away from the widowed supermodel because of the hero's utter idiocy as a father.


This act reunites the bitterly estranged he-bimbos, Zoolander and Hansel, in Italy  in a fashion world that now scorns the two as old and lame. Kristin Wiig, unrecognizable under heavy makeup and costumes, does a screamingly funny turn as a Donatella Versace-like designer whose faux-Italian accent distorts every word into a polysyllabic malapropism that is just on the verge of incomprehension.


Ratcheting up the satire past 11 is a section of INTERPOL devoted strictly to fashion crimes, a giant thimble-shaped prison for fashion's worst villains, pansexual mutant icons, and even more celebrity/fashion cameos than the last movie committed. And lots of jokes about how dumb Zoolander is/male models in general are. Only a few of the duds drop like lead weights, yet with the satire as heavy as this, draped on a Tim Burton-esque production design and direction (one can't accuse Stiller of not having all the technological gimmicks of todays digital filmmakers down), the overall feeling is more one of excess than success.


Yet, could it be otherwise? Fashion is such a camped-up sideshow and "entertainment news" the same thing, that even the likes of Christiane Amanapour and Anna Wintour play along this time. I guess the Derek Zoolander movies are the Rabelaisian satire that this narcissistic realm of celebrity-glamor culture deserves, but me, I guess I found one of these gaudy baggy-pants spoofs to be enough already; no need for a matching pair. (2 1/2 out of 4 stars)

Posted by Charles Cassady Jr. at 2:03 AM