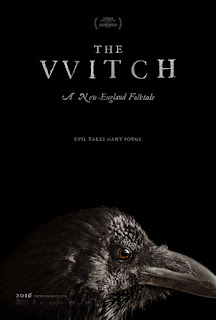 A Puritan family is expelled from their colony over a difference of religious opinion. Making a new home for themselves in the nearby woods, they soon find themselves faced with the terrible loss of their youngest member, who was in the care of his sister Thomasin (Anna Taylor-Joy) at the time. Father William (Ralph Ineson) blames wolves, but the real culprit is a supernatural evil. As things go from bad to worse for the family, they look to faith as a tool to bind them together, but it seems just as likely to tear them apart. But is it really the family’s religious beliefs that are to blame for their troubles, or is it the hubris and hypocrisy of its patriarch? This is the premise of Robert Eggers THE WITCH, a subtle, intelligent, and disturbing period horror film that has largely pleased critics, while faring considerably worse with the general movie-going public.

Like writer/director Robert Eggers, I was interested in tales of early American witchcraft as a child, and likely read many of the same accounts that inspired him in making this film. More than anything I’ve seen, THE WITCH captures the essence of those tales and brings them to appropriately unsettling and ambiguous life. Whether you believe those accounts to be true, write them off as pure superstition, or come down somewhere in the middle, what you see here is an accurate depiction of what our ancestors believed. As such, the film may seem odd and off-putting as it goes decidedly outside the standard tropes of modern horror.

Thomasin’s sexual coming of age, which she herself seems largely unaware of, also factors in. Removed from the larger society, it’s not entirely surprising that her younger brother Caleb (Harvey Scrimshaw) would have some inappropriate thoughts about his sister. William is too consumed with his own pride and the need to find sustenance to last his family through the winter to notice. However, mother Katherine (Kate Dickle), though grief stricken at the loss of her youngest child, is very much aware. This doesn’t help Thomasin’s case when her young twin siblings Mercy (Ellie Grainger) and Jonas (Lucas Dawson) repeat as fact Thomasin’s teasing claims of being a witch just as events take an even worse turn for the family.

THE WITCH is utterly committed to its particular aesthetic, and on its own terms achieves exactly what it sets out to do. The performances are first rate, the direction assured and economical, the setting and costumes authentic, and the themes well thought out and clearly communicated. And yet it should hardly be surprising that audiences have had mixed opinions of the film.

I don’t know if I’d go as far as writer Brian Keene, who wrote on social media that, “90% of the people in the theater with you will be too stupid to understand,” but it sure felt like that when my wife and I caught the film this past weekend. Most of the audience were either laughing at inappropriate moments or grumbling about the olde English language and accents, and I heard more than one person apologize to their date on the way out for having chosen this as the evening’s entertainment. It was frustrating, but I do get it, and it’s not as simple as everyone else in the theater being stupid.

After decades of Hollywood focusing almost entirely on blockbuster tentpole franchise popcorn movies, audiences have been conditioned to view films strictly as passive entertainment. They don’t expect subtext or complexity, and certainly not from a horror movie. Give them something that genuinely tries to use the horror genre to get at deeper truths and ideas instead of merely delivering jump scares and/or gore, and they don’t know what to make of it. This is a movie that some reviewers have compared to arthouse director Ingmar Bergman’s darker fare, and if you’ve seen THE VIRGIN SPRING, HOUR OF THE WOLF, or THE MAGICIAN, that doesn’t seem like an unfair comparison.

Now throw something like that to a weekend crowd expecting the next PARANORMAL ACTIVITY or THE CONJURING, and you get a theater mostly full of angry and befuddled moviegoers. And so they laugh or make comments, and the few people who actually wanted to see a movie like this get annoyed and decide to wait for home video next time, creating a vicious circle that insures we get fewer serious, intelligent films of any kind.

It would be nice if it were playing at The Cedar Lee, but the film’s distributor intentionally opted not to put it in arthouse theaters in hopes of reaching a wide audience. I guess I can understand that, but at the same time it all but insures that the audience most receptive to a film like this will have to put up with the kind of movie-going experience I had. Which is too bad, because like any great film, this deserves to be seen on the big screen. So if this does sound like your kind of movie, try to go see it on a weekday matinee. And if it sounds a little too weird or boring or whatever, then do everyone a favor and just wait until the next Blumhouse spookshow hits theaters, probably in a week or so. We’ll all be happier that way. 4 out of 4 stars.
Posted by Bob Ignizio at 2:19 PM