[THE CONFIRMATION opens in Cleveland on Friday March 18th exclusively at the Cedar Lee Theatre.] 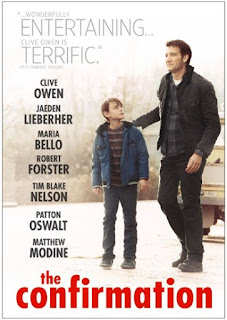 Anthony (Jaeden Lieberher) is a quiet, “wise beyond his years” young boy spending the weekend with his deadbeat dad Walt (Clive Owen). His mom Bonnie (Maria Bello) warns Walt not to drink, and to be sure the boy stays “clean” both literally and metaphorically, as his confirmation in the Catholic Church is fast approaching. It’s unclear if the Anthony really wants to be confirmed – his mom says he does, but he seems pretty dismissive of the priest during his confession, questioning much of what the priest has to say.

While Walt ducks into a bar to look for work, Anthony surreptitiously grabs himself a burger. This leaves Walt’s special woodworking tools unattended, and of course they get stolen. Walt blames Anthony for not staying with the truck, and the boy fires back that he forgot to lock it. “Sometimes when you’re drunk you forget things.”

And so father and son set out to find either the stolen tools, or a replacement set. Along the way they bond, learn various life lessons, and encounter a series of quirky movie characters like Dad’s irresponsible gun nut buddy (Tim Blake Nelson), a role written so broadly even most gun control advocates would probably find it unrealistic, and a wacky meth head who wants to help Walt and his son so badly he just makes stuff up.

Of course this is also the weekend that Dad’s landlord slaps an eviction notice on the door and locks him out and his truck breaks down, forcing him to stay at his ex-wife’s house (she and her current husband are on a religious marriage counseling retreat) and “borrow” her truck. All this before we’ve even hit the 30 minute mark.

And the absurd and improbable hijinks just keep on coming. Until things take a predictably serious turn, that is. With all the stress, and the fact that he’s been drinking rootbeer instead of booze, Dad gets the DTs. Fortunately, dad’s friend Otto (Robert Forster) shows up to help Anthony cope with it all.

Written and directed by Bob Nelson, who wrote the screenplay for the much better NEBRASKA, THE CONFIRMATION is a so-so “deadbeat dad bonding with his estranged son over an eventful weekend” story that rarely strays from formula. Even the reverb-drenched instrumental rock soundtrack is predictable. It’s not a bad film if you’re in the mood for cinematic comfort food of this sort, and the first rate cast certainly helps it go down better than it otherwise might, but it’s certainly not a “must see”. 2 out of 4 stars.
Posted by Bob Ignizio at 12:00 AM