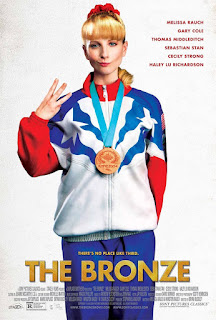 The little town of Amherst, Ohio, population 12,112, bills itself as “Sandstone Capital of the World.” It's the setting of THE BRONZE, an independent comedy starring Melissa Rauch, the mighty four-foot-eleven actress from the TV sitcom The Big Bang Theory. Rauch wrote the script with her husband, Winston Rauch (who took her surname name when they married). Bryan Buckley directed.

A favorable tax credit enticed the production to Ohio, and the crew availed itself of the historic city's quaint downtown and residential neighborhoods in 2014. Amherst's mayor, David Taylor, was delighted, telling the Elyria Chronicle-Telegram, “This is the first time Amherst has ever had something of this magnitude. We're very excited about it.”

That authentic small-town feeling is one of the more endearing qualities of THE BRONZE, an uneven film that's both charming and egregiously raunchy. Rauch, best known as the squeaky-voiced scientist Bernadette on Big Bang Theory, plays Hope Annabelle Greggory, a onetime Olympic gymnastics bronze medalist who lives in the eternal past, moving sullenly around town in her warmup suit and availing herself of free sundaes and other perks based on her long-ago accomplishment.

The town, for its part, happily accommodates her. So proud is Amherst of its medalist that her name hangs on the “Welcome to Amherst” sign, and there's a parking spot reserved for her downtown, on a street that still has a Ben Franklin five-and-dime.

Stan tolerates his daughter's abuse because he feels sorry for her. Her mother died when she was an infant, and her gymnastics career was cut short by an injury. He tries to coax Hope into getting a job, but she prefers to rage and steal and coast on her fading fame.
Hope's local celebrity status is threatened by a promising (if improbably chubby) young gymnast, Maggie Townsend (Haley Lu Richardson), who idolizes Hope.

Fate binds them together when Hope's celebrated former coach dies, and a condition of her will requires Hope to coach Maggie toward a championship. “I'd rather die than coach that loser,” Hope snarls, though a promised half-million-dollar inheritance persuades her to take the job.

At first, Hope is more interested in sabotaging Maggie than in coaching. She encourages Maggie to eat junk food until her belly bulges in her leotard, gives her marijuana smoothies, and generally tries to corrupt the ebullient, God-fearing girl.

Circumstances force hope to get serious about coaching. She begins imparting her hard-won expertise to her protégé, not only about gymnastics but about projecting a saucy personality to impress the judges. “Sell it to the bitch-ass judges!” she barks. Soon “Mighty Maggie” is on her way to the Olympics.

Maggie's new life as a coach is a journey into her past. She finds an ally in old acquaintance Ben, who owns the town's struggling gym and is afflicted with a severe facial tic. There's also Hope's old nemesis, Lance Tucker (Sebastian Stan), a slick gold-medal gymnast who's competing with her to be Maggie's coach.

The movie wobbles along as if unable to decide whether to be small-town satire, romantic comedy or balls-out raunchfest, the nadir of which is a bizarrely athletic sex scene between two gymnasts. Hope is nonetheless an interesting creation, and Rauch plays her well, with a low-register voice and Sarah Palin-like accent. Unfortunately, the character is so mean it's a little hard to believe her late-act transformation.

Charming performances are the movie's salvation. I was particularly taken with Thomas Middleditch's sweet, virginal Ben, who's so smitten with Hope he arranges a date with her in a closed shopping mall and doesn't mind that she calls him “Twitchy.” 3 out of 4 stars.