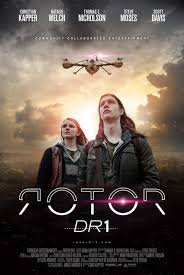 Here’s one Ohio-made movie that flew under the radar of the Cleveland International Film Festival, quite literally. Shot largely in the Canton, Ohio, director Chad Kapper's low-budget SF adventure jumps on two hot audience-draw bandwagons at once. ROTOR DR1 addresses both the appetite for YA dystopian futures along the lines of THE HUNGER GAMES and DIVERGENT (you really won’t believe how many of these are out now in the self-published book market) and fascination with remote-controlled "drone" camera craft.

The premise is that in the future, a virus has wiped out 90 per cent of humanity, leaving survivors subsisting in an anarchic wasteland (which pretty much looks like the Buckeye State, or did you guess that already?). Here, the only signs of functioning civilization are airborne drones delivering largely unused medicine from...somewhere.

Kitch (Christian Kapper, the director's son), is a teen survivor consumed with abandonment issues because of his absentee doctor-father, who was supposed to come up with a cure. He tinkers with salvaged drone batteries to briefly bring old gadgets back online, the rest of the power grid being pretty much offline.

Kitch captures DR1, a nonstandard drone copter with an AI chip (think a flying R2D2 robot). Finding it somehow connected with his AWOL dad, the glum hero fixes the machine, hooks up with a pretty young girl, and follows the DR1 through bleak landscapes on what he assumes will be a reunion.

ROTOR DR1 started out as a web series, a literally a crowd-sourced effort by thousands of online followers in the drone community, who contributed story suggestions, music, 3D-printed props and support, bringing their own drones for the “drone race” sequence among the PG-level (really, almost G-level) MAD MAX types, in what amounts to the money shots in the movie, guaranteed to cause multiple drone-gasms.

Still, the grafting together of a script that seems a bit committee-written means a rather laggard narrative that’s excessive at 99 minutes and springs a surprise ending that can be seen coming (hovering?) well in advance. The DIY production values make good use of NE Ohio’s many bleak ruins and abandoned shopping malls. Drone hobbyists will be rewarded by the whirring hardware on display. The modest movie has even nabbed distribution from Cinema Libre, a genuine national label with a mid-level profile. Whereas I can’t begin to count all the backyard local features and “art flicks” that seldom made it out of the indie filmmakers’ closets. And that’s an altitude seldom attained around here  indeed. (2 1/2 out of 4 stars)

Posted by Charles Cassady Jr. at 2:00 AM