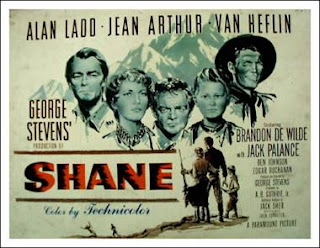 Dwelling here in Cleveland you've got to tolerate Cleveland Cinematheque director John Ewing reviving 1953's SHANE in frequent rotation. It's his favorite film, and it's good to be the king.

I probably sound like I dislike SHANE. Not at all, no need for the Sam Kinison clips. I probably just envy Ewing's money, prominence and power. "Cinematheque," yeah, right, like there aren't 500 other movies houses with a name like that. Why not an original name for the place, like, oh, I don't know, "The Cassadyorium?"


Anyway if you can set your own personal Wayback Machine to 1953 you can appreciate that SHANE is a serious-minded western that does the genre proud - not one of the silly singing-cowboy fantasies that stampeded by the thousands out of old Hollywood. Setting is the Wyoming frontier (that director George Stevens photographed with special lenses that make the Grand Tetons loom Ansel-Adams-like in the background), shortly after the Civil War. A horseman named Shane (Alan Ladd), just passing through the mountains, lingers with a family of homesteaders, the Starretts, who are in the thick of a range feud between settlers and the valley ranch boss Ryker (Emile Meyer). Ryker wants all the land for his booming cattle business, and has a posse of goons regularly bullying the would-be farmers trying to make their homes in the area. There are no sheriffs or courts established yet to sort out which side is in the right.

Shane speaks little about himself. Because of his mysterious past he's never fully accepted by the suspicious settlers. Still, he stays with the Starretts, partially because of friendship with their little boy Joey (the fine Brandon de Wilde, who would sort of fall into the realm of ill-fated-former-child-actors, sorry) who idolizes him. Shane teaches the child how to draw and shoot.
There's also a developing love triangle with gun-loathing Mrs. Starrett (Jean Arthur) and a rivalry with the husband and father Joe Starrett (Van Helfin).

Joe strives to unite the embattled farmers against Ryker, but his motivation, at least in part, may be so he can look just as tough and macho as Shane does in front of his wife and son, and in that sense he possibly blows a chance at a peaceful resolution.

It's never spelled out in plain terms, but Shane is obviously a veteran gunfighter - think freelance hit-man, in modern terms - and to the farmers no better the thugs on Ryker's payroll, even as Shane (reluctantly) straps on his six-guns to defend against the villains. You'd think the settlers would be grateful, but (except for Joey) they aren't. Late in the movie Ryker tries to negotiate a peace with Starrett, and the range boss has got a surprisingly strong argument that suddenly makes the farmers seem slightly less like poor victims and more stubborn and selfish. SHANE is a morally complex western (not just white hats and black hats) that plays well for both the action fans and viewers looking for meaty drama in grand, Golden-Age Hollywood fashion.

(And, if you weren't lucky enough to get it assigned in school, read the source novel by Cleveland-born Jack Schaeffer, one very good read and an satisfying experience all in itself)

John Ewing will personally MC the evening. Maybe he’ll bring a whole SHANE action-figure collection, including a rare Mrs. Starrett With Lifelike Adulterous Crush ™ still in shrink wrap. I once asked Ewing to explain his SHANE-mania. Why the obsession with this film? There aren't even any Ewoks or Jedi or pre-existing comic books (though Cliff Robertson did play villainous cowboy named "Shame" on the old Batman TV show, there's that).

He first beheld SHANE at age 15 at a drive-in. "I've seen the movie many times," he said. "It's my all-time favorite. And over the years - and during the movie - have identified alternately with Joey, Joe, and the Christ-like Shane. But now that I'm a dad in my mid-fifties, I see myself most as the idealistic, hardworking, but clueless Joe Starrett. Whose idealism and goodness are no match for the forces of darkness. And whose pathetic attempt to redeem himself as a self-sacrificing, gun-toting `hero' in the eyes of his Shane-struck wife and child results in nothing but a serious bump on the noggin."

Should I have put "Spoiler Alert" before that last sentence for SHANE virgins? Would be standard practice in the Cassadyorium. Of course my favorite film HEAD has no linear narrative; therefore, no spoilers possible. (3 ½ out of four stars)