Repost: 45 Years (opens in Akron on March 11th at the Nightlight Cinema)

[45 YEARS opens in Akron on Friday March 11th at The Nightlight Cinema.] 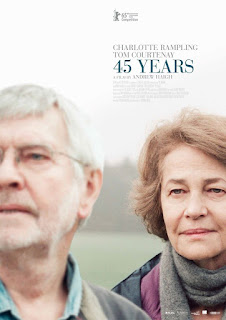 Even after almost half a century spent married to someone, do we really know them? In his 45 YEARS, writer/director Andrew Haigh seems to be saying, “no”. The title of the film reflects how long retired teacher Kate (Charlotte Rampling) and retired factory worker Geoff (Tom Courtenay) have been married. In fact, they are getting ready to celebrate that fact with a party. But in the final week leading up to their anniversary, Geoff gets some shocking and surprising news.

Before he knew Kate, Geoff was in love with a woman named Katya who died in a mountain climbing accident in Switzerland. Her body was trapped and frozen in a crevasse where it remained, seemingly irretrievable. Now, thanks to global warming, her perfectly preserved corpse has been found, and since Geoff was listed as her next of kin, the authorities have notified him.

It shouldn’t be a big deal, except it is. Geoff clearly has unresolved issues relating to his deceased ex, and even as he should be focusing on his anniversary party, he’s devoting considerable time and effort to making plans to go to Switzerland. He comments on how old he’ll feel seeing her preserved as young as the day she died, and at night sneaks up to the attic to look at old photos and souvenirs.

Kate tries not to let it bother her, but it does. Geoff has never really talked to her about his ex, and some of the details he’s kept to himself may have ramifications for how their own relationship has played out. It’s as if the ghost of a past infidelity has suddenly come into their lives to haunt them.

45 YEARS is a complex, adult work that doesn’t neatly wrap itself up. There are no easy answers for how these characters ought to react, and the movie doesn’t try to offer any. Instead, it asks us to simply think about the issues it raises, and to try to understand and feel compassion for both of its leads, but especially for Ms. Rampling’s Kate.

When your leads are Rampling and Courtenay, it’s almost redundant to say that the performances are superb; that’s a given. Rampling in particular has always made of habit of picking rich and challenging roles to play, and has had a particularly strong run of films in recent years. For what it’s worth, the Oscar folks seem to finally have taken notice and given her long overdue and much deserved nomination for “Best Actress”. 4 out of 4 stars.
Posted by Bob Ignizio at 12:00 AM