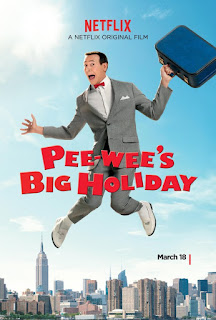 Released in 1985, PEE-WEE’S BIG ADVENTURE took cult comedian Paul Reubens and made him and his signature character, Pee-wee Herman, a star, launching the directorial career of Tim Burton, to boot. Reubens capitalized on the film’s success with the kid’s Saturday morning TV show ‘Pee-wee’s Playhouse’ that ran for five seasons from 1986 to 1990. Both endeavors were critical and popular successes that appealed to the masses, yet still maintained a certain level of cult cachet.

Unfortunately, Pee-wee’s second big screen outing, BIG TOP PEE-WEE, was mediocre at best. A pair of high profile scandals (neither of which, in this author’s opinion, should have even been news, let alone criminal cases) didn’t exactly help his career as a children’s entertainer, either. So Reubens continued acting, with memorable supporting roles in films like BLOW and MYSTERY MEN, but the Pee-wee Herman character was retired. Until now.

Although still playing the same Pee-wee Herman we know and love, Reubens’ script acts as if the previous movies (and, one assumes, TV show) never happened. This Pee-wee has never had a big adventure or joined the circus. In fact, he’s never left his stuck in a time warp small town of Fairvale, where he works as a short order cook at the local greasy spoon. That all changes when Joe Manganiello (playing himself) walks in and orders a chocolate milkshake with a root beer barrel chaser. He and Pee-wee sense in each other kindred souls, and so Manganiello invites Pee-wee to his birthday party in New York City. Now if Pee-wee wants to pursue his man crush, he’ll have to leave the comfort of home and hit the open road. Adventure and silliness ensue.

PEE-WEE’S BIG HOLIDAY tries really hard to recapture the oddball magic of BIG ADVENTURE, and at times it does. But director John Lee just doesn’t commit to the alternate reality of Pee-wee’s universe as wholeheartedly (or creatively) as Burton did. Sure, bits like the opening dream sequence with a female E.T., or the trio of bank robbing bad girls (Jessica Pohly, Stephanie Beatriz, and Alia Shawkat) paying homage to Russ Meyer’s FASTER, PUSSYCAT! KILL! KILL! are in that vein, but there’s never the same sense of crazy possibility, where anything could happen in this film’s reality, that permeates BIG ADVENTURE.

Fortunately, Reubens, despite the passage of time, can still channel his eternal manboy perfectly. He doesn’t play the part, he inhabits it. His voice is a little different, and you can see he’s put on a few pounds (not too many, but you can tell), but overall this is still the same Pee-wee we know and love. It’s nowhere near in danger of being the sort of multiple viewing worthy cult classic that BIG ADVENTURE was, but for a straight to Netflix nostalgia trip it’s at least as good, and maybe even a little better, than we had any right to expect. 3 out of 4 stars.
Posted by Bob Ignizio at 12:00 AM