Review (sort of) by Bob Ignizio 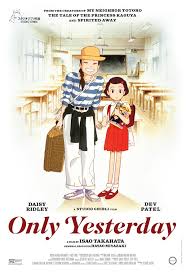 I’m not going to lie to you good people. I did not watch all of ONLY YESTERDAY.  I tried my best to get through it, but after an hour I gave up.

This feature length animated film from Japan’s Studio Ghibli was a hit in its country of origin on its initial release in 1991, but is only now making its way stateside. The story, in which a young woman reminisces about her fifth grade self, is genuine and the sort of thing the movies probably need more of. But the way it unfolds on screen is painfully slow paced and, to a large degree, lacking in visual interest. There are one or two moments in which the medium of animation is used in a way that might not have worked as well with live actors, but not enough to make up for what a flesh and blood cast could have brought to the proceedings.

On the plus side, there are a number of little moments throughout that feel very real and authentic and relatable. That’s something we don’t get nearly enough of in modern films, particularly ones centered on female characters. And of course, the animation is of the same high quality one expects from Studio Ghibli. There’s just nothing about it to really grab you.

You often hear people say that a movie “isn’t for everyone.” Well, no movie is truly “for everyone”, no matter how hard some try. That’s why, despite my personal reaction, I feel it’s important to let people who might be more receptive to ONLY YESTERDAY than I was know that it is going to be playing. (No star rating since I copped out and didn’t finish the movie).

For you anime purists, it bears mentioning that Akron's Nightlight Cinema is showing the film in both its original Japanese language version with subtitles, and in an English dubbed version featuring the voices of Daisy Ridley and Dev Patel. All shows before 8:00pm are the new English-language version, and all shows after 8:00pm are the original Japanese version with English subtitles.

As far as I can tell, the Cedar Lee is only showing the English language version.