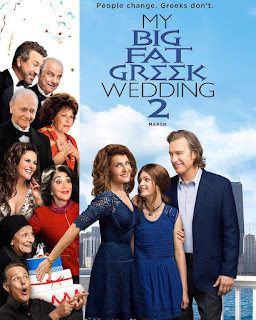 In 2002, the original MY BIG FAT GREEK WEDDING scored more than $241 million at the box offices – and is regarded as one of the most successful romantic comedies of all time. With success 14 years ago, and plenty of loyal fans, they decided to make a sequel with MY BIG FAT GREEK WEDDING 2. At least, I’m assuming it was just for the fans – because I don’t think it was because they had another great story idea.
This time, after a zany and harebrained discovery that Toula’s parents are not officially married, the story is about her parents renewing their own wedding vows after Toula’s dad (played by Michael Constantine) finds a missing signature on his own wedding certificate.

The whole Greek gang came back for the revival. Most importantly, Nia Vardalos, who is both the star and the writer of both the original and the sequel. Vardalos is pleasant as lead character, Toula. In this sequel, she’s a meddlesome mom stuck in a rut. John Corbett (PARENTHOOD, RAISING HELEN) reprises his role as agreeable and cool husband Ian – though his relevance to this sequel plot is fairly inconsequential. The cast included one notable addition, Elena Kampouris as Toula and Ian’s high school aged daughter Paris. Her presence was the main, and one of the only, indications that time had passed since we last met up with the Big Fat Greek family.

Not only was the full cast back, so were all the same jokes! Yep, all of them. So maybe the story was a little lazy. Or, maybe the glass is half full, and they movie-makers were just catering to their loyal fans (to the point that someone who had not seen the original would probably miss a majority of the jokes in MBFGW 2, as they were almost entirely call-backs to the original). Either way, the old jokes lost some zing. Although, Andrea Martin’s over-the-top Aunt Voula character got some pretty big laughs with her overbearing hijinks and take-charge ways.

The special fabric of the original MBFGW was the compassionate and charming story of a family preserving their culture. But, I suppose the movie-makers thought that exposition had been adequately made in the original, because MBFGW 2 left out that special charm. Without that story, the movie felt more like a string of over-the-top jokes and some references to baklava.

Sub-plots included: Paris, a high school senior, choosing a college. Toula and Ian trying to rekindle the spark in their relationship. But nothing that had enough substance to make the story compelling.

I’m giving it one star for cuteness, this star is dedicated all the fans who loved the first one and appreciated this trip down memory lane. 1 out of 4 stars
Posted by Candice Lee at 9:11 PM