Hello, My Name Is Doris (opens in Cleveland 3/18 at the Cedar Lee Theatre)

[HELLO MY NAME IS DORIS opens in Cleveland on Friday March 18th exclusively at the Cedar Lee Theatre.] 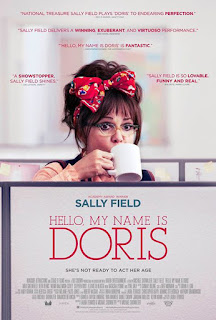 HELLO, MY NAME IS DORIS feels like an accomplishment. Perhaps because DORIS feels like several films wrapped in one. A comedy, a fantasy, a drama, an indie flick, a coming of age story. Not only does it operate under all those categories, it operates functionally and quite successfully.

When DORIS begins, our title character, Doris Miller played by Sally Field, has lost her mother. Much of her life to this point has been dedicated to her mom for whom she has given up her own social and emotional needs to care for. Doris looks like a stereotypical cat lady, with a bit more flare. She has a few friends, an accounting job at a fashion firm in New York City, and a brother (Stephen Root) who is worried about her hoarding habits. He and his wife also want her to move out of their childhood home (in part to make money off the house). She takes the ferry from Staten Island each day to work. It is clear that Doris isn’t one for change.


Following the death of her mother, Doris has a run-in with a new employee in her office on the elevator. John Fremont (Max Greenfield) is a young, charming and handsome man. Doris quickly develops a crush, fully aware of its improbability. When her closest friend suggests that she attend a self-help seminar, Doris’ inner go-getter is awakened. And so Doris sets her sights on John, repeating her new mantra, “I’m possible,” rather than “impossible.”

In her search for John’s companionship, she finds Facebook, electronic music, social gatherings and more. John finds Doris to be fun and eccentric company but Doris is working towards something more serious. The story doesn’t quite achieve the beauty of HAROLD AND MAUDE, a film with some commonalities conceptually, but it’s a modern take on the older woman/younger man love story.

DORIS is a low key film, that treats its main character with seriousness. It is so vital that, while Doris isn’t always in on the joke, the film never asks the audience to laugh at her. Rather, we feel for her. We feel her loneliness, and her excitement, her sadness and her joyfulness. While Doris is successfully emerging from her shell, she is also battling what seems to be a borderline personality disorder, and the contrast moves the movie beyond quirky comedy to something more legitimate. The balance is due in part to good writing and delicate direction, but most of all it’s due to a superb performance by Sally Field. Field is clearly living in Doris’s skin; she’s honest and never a caricature. But despite the exhilaration of chasing after John, Doris still faces hurdles in her personal life, both from the fallout of losing her mother and her contentious relationship with her brother and his dreadful wife.

Outside of Doris’s occasional steamy daydream, DORIS opts for practical storytelling rather than crazy antics or over-the-top comedic gags. The film is better for this approach. Performances from Field and Greenfield aside, credit should be given to Michael Showalter, director of DORIS. Showalter has dabbled in absurdity for decades, getting his start as part of the comedic team known as THE STATE. He went on to be part of many delightful projects such as the WET HOT AMERICAN SUMMER franchise (which he helped write) and STELLA. Still, DORIS is only his second feature film as director (he directed and starred in 2005’s THE BAXTER), but he displays a comfort and knack for storytelling with subtle humor.

Showalter grounds the film in enough reality and enough emotion that the audience is rooting for both characters. We cheer for Doris to achieve what seems out of reach, we want for her happiness. Though naive to Doris’ designs, Greenfield presents such a friendly, loving character, that we cheer for him as well. The whole experience is a pleasure to take in, even if it isn’t always perfect. DORIS provides authentic, loving performances, a few chuckles and a whole lot of story and heart. 3 1/2 out of 4 stars
Posted by Joseph Anthony at 12:23 AM