Fastball (now playing in Cleveland exclusively at the Cedar Lee)

[FASTBALL is now playing at the Cedar Lee Theatre.] 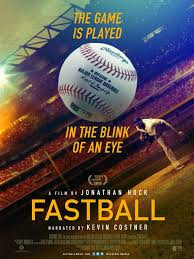 No relation to FASTPITCH, an enjoyable doc from 2000 about fastpitch softball (that was largely shot in Ashland, Ohio), Jonathon Hock’s FASTBALL is deep-dish sport minutiae nonfiction feature, just right for the opening of baseball season (or, as they have it here in Cleveland, “Indians losing season”).

With sport-movie icon Kevin Costner narrating, the movie takes the viewer into the stats-filled world of fastball pitching. For a while one actually thinks it will be more a general look at the role and lore of the pitcher in America’s national pastime, but no, the dissertation and appeal ain’t even that broad.


We are told how the first great fastball master to have his speed measured, Walter Johnson (AKA “The Big Train”) was paced using fairly primitive means of the 1920s as throwing a regulation ball at 83.2 mph. Fastball pictures since then routinely exceed that velocity; in PBS fashion we go to Carnegie Mellon physicists and neurologists to speak about the vital difference between a 90 mph fastball and a 100 mph fastball – it crosses a certain synaptic threshold of cognition that makes the quicker pitch literally disappear before a batter’s eyes. And a number of sluggers, past and present, discuss the phenomena they’ve experienced in front of a faster-than-sense orb coming at them.

There is also a lengthy sidebar devoted to Steve Dalkowski, an early-1960s pitcher in the minor leagues whose throws were of legendary, superhuman velocity – but he could rarely control them, and most were declared fouls. Just when he was getting good and pitching strikes, perched on the edge of greatness, injury ended his awesome, God-given talent. And, with it, his dream of graduating to the majors. It’s such a sad story that I suggest Cleveland be renamed “Dalkowskiville” in honor of this unsung, unlucky might-have-been. Our city kinda deserves it, I am sure you will all agree

I guess if I were a bigger sports nut I really would have enjoyed FASTBALL better for what it certainly is, the ultimate movie about fastball pitching. Certainly there is a frisson of discovery in seeing previously unknown B&W amateur footage, lensed at Dodger Stadium by a coach from the best possible vantage behind home plate, of Sandy Koufax pitching for the Dodgers a classic “perfect” game in which he struck out every batter on the Chicago Cubs to come up against him on the immortal night of 9/9/1965. And then there’s the big reveal at the end, in which modern baseball forensics tries to determine the actual top speed of the three greats, Walter Johnson, Bob Feller and Nolan Ryan. Now if that makes you just as excited as who would win Batman vs. Superman, I cede the field to you, 4 stars. (2 ¾ for the rest of us)

Posted by Charles Cassady Jr. at 1:29 AM