Eraserhead (April 2nd and 3rd at the Cleveland Cinematheque) 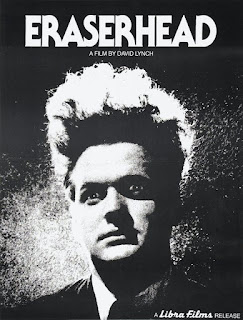 There are a handful of “Midnight Movies” that truly define the genre. THE ROCKY HORROR PICTURE SHOW, of course. John Waters’ exercise in good bad taste PINK FLAMINGOS, and Alejandro Jodorowsky’s psychedelic western EL TOPO, the Jimmy Cliff starring reggae crime film THE HARDER THEY COME, and even the arguably more mainstream horrors of George Romero’s NIGHT OF THE LIVING DEAD all captivated stoned teens and twenty-somethings at late-night theatrical viewings in the seventies and beyond. But perhaps no film better sums up the midnight movie’s mix of head trip, horror, and twisted humor than David Lynch’s debut feature ERASERHEAD.

Shot in glorious black and white to better capture the feeling of industrial desolation of its protagonist’s surroundings, and further enhanced by meticulously grating sound design, the film is a waking nightmare. Themes of sexual disgust and the fear of being a new parent, seeing this thing that you’ve helped make as some sort of alien creature, are obvious. But there’s still plenty of room for individual interpretation in Lynch’s surreal imagery. Trying too hard to understand the film on some sort of straightforward, literal level is probably not the best way to approach it, though. Simply let it wash over you and effect you on a subconscious level.

Despite having been shot over a five year period, the film maintains a remarkably consistent look and tone. You can tell this film was a labor of love for all involved. The entire cast (Jack Nance as protagonist Henry, Charlotte Spencer as his girlfriend Mary, and all the supporting players) treat every scene they’re in in a perfectly matter of fact manner, no matter how bizarre the situation. And of course there’s Henry and Mary’s baby, a masterpiece of low budget special effects work that is utterly convincing and disturbing.

If you take the movies seriously at all, this one is a must see. You may find it disturbing and difficult, but it is about as perfect a realization of an artist’s vision as has ever been captured on film. It’s just too bad the Cinematheque couldn’t show it at midnight. 4 out of 4 stars.
Posted by Bob Ignizio at 11:28 AM