[EMBRACE OF THE SERPENT opens in Cleveland on Friday March 11th exclusively at the Cedar Lee Theatre.] 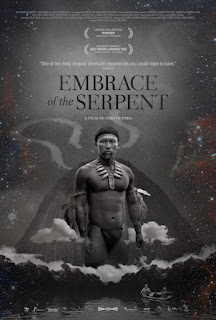 Karamakate is a powerful shaman and the last living member of his tribe. As such, he is keeper of certain knowledge regarding hallucinogenic plants sacred to his people, a knowledge he would just as soon see fade from existence as share with the white man who has come to his land, taken its resources (notably rubber), and slaughtered and enslaved its people.

When we first meet Karamakate in EMBRACE OF THE SERPENT, it is 1909 and he is still a relatively young man played by Nilbio Torres. A westernized native named Manduca (Yauenkü Migue) has sought him out, having been told by the other shamans that he is the only one who can save Manduca’s friend, a German explorer named Theo (Jan Bijvoet). To do so will require a plant known as yakruna, sacred to Karamakate’s people. Despite strong reservations, the shaman is eventually convinced to help, and the three men set off by boat for what will prove to be a most eventful adventure.

We don’t yet know how that adventure will play out, though, when the film moves forward in time to 1940. An older Karamakate is again approached by Manduca to help yet another white explorer, this time an American named Evan (Brionne Davis). But now, Karamakate is a hollow shell of his old self, seemingly unable to remember his old knowledge, and yet compelled to try and help this second explorer, and perhaps get a bit of his soul back along the way.

Certainly director Ciro Guerra, who co-wrote the film with Jacques Toulemonde Vidal based on the diaries of real life explorers Richard Evans Schultes and Theodor Koch-Grunberg, is trying to convey an anti-colonialism theme here. But he also seems to be putting some of the responsibility on Karamakate for not taking the opportunity to teach the white man. Perhaps if he had been more trusting of Theo, both he and his country would have been better off. Or perhaps not. Either way, the rubber barons would probably have kept coming, and kept exploiting the land and its people.

Although this theme is always present, EMBRACE OF THE SERPENT never feels heavy handed. It is an enthralling adventure and a metaphysical journey that at times recalls both Werner Herzog’s South American films AGUIRRE, THE WRATH OF GOD and FITZCARALDO, and at others the midnight movie head trips of (also Chilean) director Alejandro Jodorowsky’s EL TOPO and THE HOLY MOUNTAIN, albeit in a far more accessible and comprehensible fashion.

The movie is shot mostly in black and white, which aside from the aesthetic pleasures of the medium seems appropriate given that everything in this film – the land and its people – has been drained of life. Color comes in only in one sequence, and while it’s perhaps a bit obvious and on the nose, it nonetheless works.

EMBRACE OF THE SERPENT won was nominated for this year’s Academy Award for “Best Foreign Language Film”, and although it didn't win, you’d be hard pressed to find a more deserving work. It is not an “eat your vegetables” kind of arthouse film, but one I imagine even mainstream moviegoers, provided they aren’t turned off by subtitles, would enjoy if they give it a chance. 4 out of 4 stars.
Posted by Bob Ignizio at 12:00 AM