Bleak Street (March 17th and 20th at the Cleveland Cinematheque) 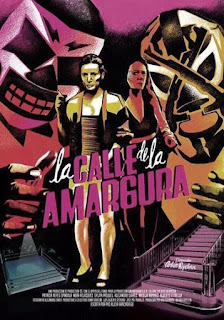 Classical filmmaking aesthetics make BLEAK STREET, directed by Arturo Ripstein from a screenplay by his wife Paz Alicia Garciadiego, feel like a lost 1940’s film noir, albeit one shot and set in Mexico. And like those classic noirs, we know almost from the outset that things won’t be ending happily for the protagonists. Effortlessly living up to its name, seldom has a film been populated by so many desperate fringe dwellers destined for doom.

The glistening black and white photography by cinematographer Alejandro Cantú only adds to the atmosphere of hopelessness and despair, while at the same time imparting a dark beauty to the proceedings. Stop the film at virtually any point and one would have an image suitable for framing, but probably not one most people would want to hang on their walls. But this is not the sort of film generally described as “painterly”, filled with static compositions. Fluid, assured camera movements give the film a vitality that belies its dour tone.

The plot revolves around two odd couples. First, we meet twin brothers Little Death and Little AK (Juan Francisco Longoria and Guillermo Lopez). Both are little people working as masked wrestlers (luchadores), each one a diminutive version of a larger wrestler for whom they act as both ring partner and mascot. Ostensibly managed by their drunk father, it is really their mother who takes care of business, even helping her sons secure the services of prostitutes for a post-match celebration.

The two women mom procures are the other main pair in the film: Adela (Nora Velazquez) and Dora (Patricia Reyes Spindola). Their best years long behind them, the two struggle to make ends meet. Adela makes extra money by propping her (most likely senile) mom up in the street as a beggar. As for Dora, even when she does make money, her drunk husband Max (Alejandro Suarez) is likely to steal it. To make matters worse, he also steals her “work clothes”, wearing them for gay trysts. Dora is more upset over her clothes being ruined than her husband’s infidelity.

It’s a grim inevitability that the stories of these characters will intersect in tragedy.

Ripstein sees neither killers nor victims as wholly good or evil. They are all victims of their situations in life, but at the same time each has their dark side that cannot be entirely excused. Such is life. Beyond that, there really isn’t any message to the film, but it is an engrossing and visually stunning piece of cinema that I quite enjoyed watching. 3 ½ out of 4 stars.