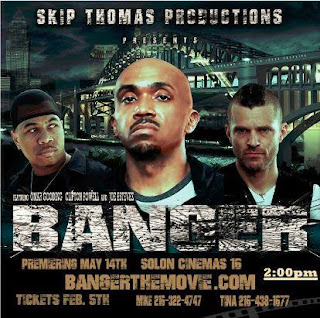 Cleveland based film company Skip Thomas Productions is set to premiere its latest feature film Banger on Sat. May 14, 2016 at Solon Cinemas.

Banger’s story follows two street crews fighting for control of the city’s lucrative methamphetamine trade. When a turf dispute leads to the death of a Haitian immigrant named Ishmel Babet, his mother conjures up a spell to bring him back from the grave to exact revenge on those responsible. The code of the street is simple... stay focused, stay loyal and stay alive.


“We have assembled a phenomenal cast,” said Tina Hobbs, COO of Skip Thomas Productions and owner of HobbsStyle Casting & Production.

Berry based all of Banger’s production in Cleveland, completely utilizing local actors, crew and resources while bringing in Hollywood talent to create higher production value.

“Cleveland, similar to what happened in Atlanta over recent years, has the capability of becoming the Hollywood of the Midwest,” says Berry. Skip Thomas Productions is looking to add to the city’s thriving arts culture using this film as their vehicle. “Banger is a suspense thriller sure to make audiences hold on to the edge of their seats.”

The 4:00 screening is now sold out. A 2:00 screening has been added.  Show times, ticket information and updates can be found at www.Bangerthemovie.com

ABOUT SKIP THOMAS PRODUCTIONS
Established in 2012, based in Cleveland, Ohio, Skip Thomas Productions has produced a number of films including Secrets and If You Knew Better, You’d Do Better as well as a television pilot titled 3rd Floor West. CEO Mike Berry and COO Tina Hobbs are both products of Cleveland’s inner city with a passion for giving back to their community.  They have partnered with the Cuyahoga Metropolitan Housing Authority (CMHA) to provide a charitable donation for youth interested in the entertainment industry.

ABOUT MIKE BERRY
Mike Berry once primarily considered himself a writer but his inability to find someone to produce his work forced him to become a director, cinematographer and editor in order to bring his movies to the screen.
Despite a life of trials and tribulations, Berry’s accomplishments include recording a Top 100 Billboard Album, Weight of the World, as well as a Top 20 single, Me Without a Rhyme, on the Billboard charts in early 2000 under the stage name of Big Gank for independent label FADE ENTERTAINMENT. He also received various bodybuilding awards including “Mr. Natural Ohio,” and “Mr. Natural Northern USA.”
Possessing true talent, a relentless work ethic and a winner’s attitude, Berry has the potential to take the film world by storm and carve out a place for himself among the list of who’s who in the industry. Berry also published the novel titled The Dangerous Times.

ABOUT TINA HOBBS
Tina Hobbs is owner of HobbsStyle Casting & Production which houses all of her production services. She received her Bachelor’s of Business Administration degree from Cleveland State University and received her first taste of the entertainment industry as an actress in various film and theater projects. Her experiences sparked her interest in the behind-the-scenes dealings of production which prompted her to become a casting director and producer.
Tina has over 15 years of analytical and strategic planning experience and is a member of African American Women in Cinema (AAWIC).  She also has experience as a location scout. Tina is dedicated to developing quality global entertainment.
Since 2011, her company has cast and produced numerous projects including feature films, short films, television shows, music videos and theater productions.
Posted by Bob Ignizio at 12:00 AM