Another thing that won’t be the same without Johnny Manziel: Cinema Wasteland in Strongsville, April 1, 2 and 3. 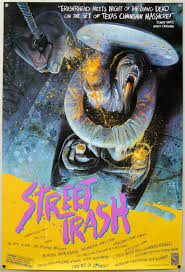 Cleveland is probably now facing its own destruction at the hands of political rioters at the upcoming Republican National Convention. Police are militarizing, any downtown merchants left who sense the approaching violence are closing up and planning to move far away into the suburbs (preferably suburbs of some other city), and many early refugees are scrambling to jump the border into Canada or Mexico before the Wall goes up.

Looks like hosting the RNC wasn’t such a bright idea after all. If only it had been replaced in this dying city’s drive for recognition by something more benign and socially positive. Like the Adult Video News awards. Or a summer encore of the Cleveland Comic-Con, where the slave-Leia cosplayers would not have been under such heavy fur parkas.

Yes, President-Elect Trump orders you to attend Cinema Wasteland. “It’s going to be yuuuuuge!” he says.

In the spirit of such movie-memorabilia and nostalgia expos as the Monster Bash in Pittsburgh and DragonCon in Atlanta, Cinema Wasteland is a fan gathering, film marathon, variety show and memorabilia expo at the Holiday Inn Select of Strongsville, devoted to what founder Ken Kish describes as the drive-in B-movie golden era, roughly from the late 1950s to the late 1980s.

At Cinema Wasteland longtime connoisseurs of such entertainment turn out to meet and greet the stars, attend panel discussions, enjoy revivals of the old classics, and  buy, sell, trade and enjoy all that's culty and screwball in the movies. As an added subtraction, local and regional filmmakers visit peddling their wares, TV horror hosts come from far and wide, hosting live schtick, and Holiday Inn room parties proliferate after hours.

The central attraction at this spring’s CW a cast/crew reunion of 1987‘s STREET TRASH, a lurid splatter picture with a somewhat (by gutter 1980s splatter-film standards) more imaginative premise than most: a long-hidden cache of Prohibition-era bootleg liquor surfaces, incredibly toxic, explosive and corrosive to human anatomy, in a dingy garbage-dump community in modern NYC. Rotgut that literally rots one’s guts, the vile brew has a dramatic effect on the power dynamics among skid-row homeless and bullies in the filthy block’s micro-society. The film was particular favorite of the late, great Ed “Brother Ed” Wille, of the local band Uncle Scratch’s Gospel Revival and co-owner of the well-remembered B-Ware Video and Books in Lakewood.

Any truth to the rumor that STREET TRASH is an uncredited horror remake of Akira Kurosawa’s 1970 shantytown drama DODES’KA-DEN? Nobody at the RNC (soon to turn downtown Cleveland into a sea of fire) could likely answer that question. But at Cinema Wasteland you’ll be able to meet actual STREET TRASH participants, including leading lady Jane Arakawa, makeup f/x artist Jennifer Aspinall, actors James Lorinz and Tony Darrow, scriptwriter Roy Frumkes, and cast member Mike Lackey, who has turned comic-book creator with a commemorative graphic book based on, of course, STREET TRASH.

And marathon film screenings. Projected cinema showcased include a Saturday-morning Three Stooges and cartoon festival (MC’d by Son of Ghoul), the famously banned-for-racism 1933 Little Rascals short KID FROM BORNEO (probably on loan from the RNC), and the only recently appreciated REVENGE OF DR. X (1970), alias VENUS FLY TRAP a hysterical late-career Ed Wood script, shot in Japan, about a NASA scientist (complete with a hunchback assistant) who, with the memorable assistance of topless girl pearl divers, GMOs a beastly humanoid carnivorous plant. Another Japanese production, the giant-monster movie KING KONG ESCAPES, evokes giggles today for the name of its Dracula-lookalike villain, Doctor Who (well, that must have sounded oriental at the time). The new WINNERS TAPE ALL is a mockumentary tribute to a fictitious (of course, but there are numerous real-life parallels) set of West Virginia brothers who gained notoriety during the VHS camcorder era for their no-budget slasher cheapies shot on cassette.

You just can’t get that kind of thing from Republican conventions, at least not until well into President Trump’s second term. You know if any of the current candidates will do a real-life HUNGER GAMES it would be Trump. Except the death matches would be all celebrities in swimsuits and lingerie.

Admission at the door is $20 on Friday, $25 on Saturday, and $15 on Sunday. or you can buy at three-day $50 VIP pass. For more info check out the website www.cinemawasteland.com.
Posted by Charles Cassady Jr. at 1:18 AM