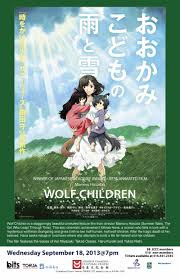 Hailing from the legendary Japanese distributor Toho, WOLF CHILDREN was a hit theatrical release in Nippon in 2012 and, and no wonder (well, aside from riding the lupine coattails of TWILIGHT movies, of course). Visually stirring and hitting a lot of buttons for longtime Japanimation connoisseurs, animator Mamoru Hosoda's tender fantasy does not hail from Hayao Miyazaki's renown Studio Ghibli - but there is a strong affinity, particularly in its reverence for the natural world.


Heroine Hana is an orphaned, big-city Japanese college student with a keep-smiling attitude to life (pretty girl, big-city college student, keep-smiling attitude to life? Like I said, it's a fantasy). She falls in love with a handsome loner on the fringes of the campus. The nameless man reveals his astounding secret, that he is actually a Japanese wolf, the last of his kind, hiding in human form. Werewolf movies have it all wrong, he affirms.

Instead of rejecting the brooding guy, Hana insists on becoming a couple. They live in the city together as wolf-man and wife. But then tragedy leaves the husband anonymous roadkill, literally. Hana is a single mother - with two babies who inherited their father's lycanthrope qualities, the headstrong daughter Yuki and the more timid son Ame.
For the kids' protection Hana moves to the sparsely settled, forested countryside, where the inexperienced young mom tries to subsist off the land. As kindly rustic neighbors try to help out, Hana's growing wolf-children react to their mixed heritage in different ways. And the ultimate tearjerker question is who will determine to choose a life as a human, and who will go the path of a fierce wolf? For what its worth, if youve seen the Japanese economy lately, probably better to be a beast of the wild (as though Cleveland has the right to talk).


Yes, its fairly predictable, but it also keeps the viewer enthralled for a near two-hour run time. And its not common to see anime with an adult (Hana) as the protagonist, even if there is a faint pack-running resemblence to the Disney Channels UK werewolf import Wolfblood. This one is still an alpha, and the opportunity to see it on a big screen will make you appreciate the good breeding and pedigree. (3 1/4 out of 4 stars)