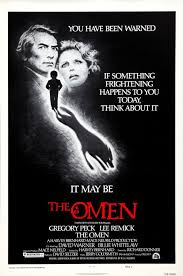 With the smash-hit success of THE EXORCIST book-and-movie package, there was a media vogue for devil-worship and occultism in the early 1970s. In that milieu this dark script, derived from some dubious and badly-paraphrased Bible passages, got an amen-hallelujah from Hollywood, to become a big-budget supernatural production, with real money spent on its scares and an A-list cast (both were still relative rarities for the horror genre at that time).

Though critics didn't much like THE OMEN (Michael Medved listed it in 1980 as one of the 50 worst films ever made) and the basic idea was done with more insidious chills and deeper psychological insight in ROSEMARY’S BABY, this movie was a box-office hit, spawning several sequels, and getting a remake in 2006 that nobody much remembers.

The original 1976 shocker is sturdily-built but predictable and downbeat, with its extravagant death scenes tending to stand out more so than the lugubrious narrative from director Richard Donner, who later did a much better, bang-up job with SUPERMAN: THE MOVIE (and, as far as some fans are concerned, THE GOONIES).

Setting is Europe, where Robert Thorn (Gregory Peck), US ambassador to Britain, tries to spare his wife Katherine (Lee Remick) from the tragic news that she's lost her first-born son in childbirth. He quickly substitutes another baby, conveniently offered to him as an Italian orphan.

The boy is brought up in their wealthy English household as Damien (Harvey Stevens), a quiet kid around whom weird things seem to happen. At a birthday party a young nanny hangs herself in front of all the guests. Zoo animals go berserk around the child. A baleful rogue Catholic priest (you might recognize Patrick Troughton, one of the first actors to play Doctor Who) hissingly warns Thorn that Damien is, in fact, the very spawn of Satan. Subsequently a falling metal rod spears the clergyman as he tries to flee a storm into the sanctuary of church. As the creepy incidents pile up, Ambassador Thorn, with the help of a reporter and few other allies, starts investigating Damien's shadowy origins, and starts to confirm a hodgepodge of nasty prophecies and suggestions that he's been conned by an underground conspiracy of devil-worshippers into adopting the legendary antichrist, the incarnation of all evil, who will usher in the End of the World.

This sounds pretty compelling indeed. But in cinematic terms it mostly translates as a string of spectacular, sort of torture-porn-lite deaths (usually in horrendous accidents that are not exactly Acts of God) for anyone who poses a threat to Damien - with lots of `dead' space in between, as Thorn struggles to confirm/deny the omen-ous truth. Characterizations don't go very deep, and, as far as themes or any sort, there's the sense of a modern, secular world in which the bulwarks of traditional Christianity are absent or weak - and thus even decent people like the Thorns are powerless when an unseen but very hands-on devil and his minions take the offense with Damian

Damien...demon...Damien...demon… hmmmm...Yeah, it’s so obvious these days it’s even kind of funny. In a larger, outside-the-monster-magazine sense, you could say this movie channels a post-1960s, post-Vietnam, post-Watergate angst, the fatalistic fear that there was no longer any such thing as innocence. That even little children, formerly upheld onscreen as icons of unspoiled goodness, could be bad from birth. REALLY bad. Then again, so could the movies themselves. (2 ¼ stars)