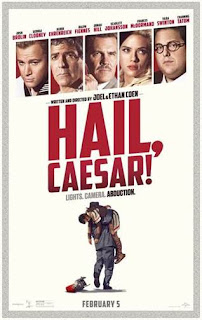 The Coen Brothers have long shown a fascination with old Hollywood. Classic cinema runs through the veins of almost all of their films, sometimes subtly as in their neo noir debut BLOOD SIMPLE, sometimes more overtly as in their homage to Hollywood screwball comedies THE HUDSUCKER PROXY, or in straight up remakes of classic films like THE LADYKILLERS and TRUE GRIT. But no Cohen Brothers film to date has given them the opportunity to celebrate old movies and old movie making techniques to the extent that their latest effort, HAIL, CAESAR!, has.

Set at the fictional Capitol Studios in 1950s Hollywood, CAESAR is the story of studio “fixer” Eddie Mannix (Josh Brolin). His job is to keep the unsavory side of the dream factory out of the press, whether it be leading ladies having a child out of wedlock like DeeAnna Moran (Scarlett Johansson), star of a series of watery musicals, or keeping a lid on the same sex preferences of hitmaker director Lawrence LAurentz (Ralph Fiennes). And this being the fifties, you can bet the “Red Scare” is in the air. Specifically, Capitol’s biggest star Baird Whitlock (George Clooney) is kidnapped by a group of communist screenwriters before he can finish his latest film, a biblical epic (also) titled HAIL, CAESAR!.

Along the way, the film allows for asides involving a manufactured romance between hayseed cowboy star Hobie Doyle (Alden Ehrenreich) and Carmen Miranda stand-in Carlotta Valdez (Veronica Osorio), Channing Tatum performing a Naval inspired dance number as a swishy Fred Astaire type, and Tilda Swinton as competing twin gossip columnists. While Mannix tries to manage all these various characters and their problems, he’s also entertaining an offer to take a new, easier job with an aeronautics company, trying to quit smoking, and making nightly trips to the confessional.

There’s an awful lot going on in the film, much of which feels tangential to the already lightweight plot. Maybe another viewing would bring the connections into sharper focus, or reveal the deeper themes the Coens were going for here, but I honestly doubt it. And that’s okay. It probably won’t achieve the cult status of Coen films like THE BIG LEBOWSKI, or the critical acclaim and awards of their weightier works like FARGO and NO COUNTRY FOR OLD MEN, but as a film that sets out to be a love letter to the movie mythology of yore, it entertains, and that’s enough. 3 out of 4 stars.
Posted by Bob Ignizio at 1:50 PM