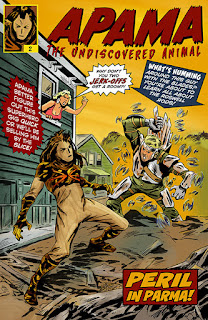 Apama is the story of Cleveland-born Hungarian ice cream truck driver Ilyia Zjarsky who discovers an ancient scroll that allows him to gain the powers of the most savage beast man has never known. C-town’s own streets, landmarks and citizens are woven into the fabric of this offbeat series. The story is written and produced by longtime residents Ted Sikora and Milo Miller.


The Volume 1 collection, which compiles issues 1-5, is being distributed by the largest supplier of comics in the world, Diamond Distribution. The book was featured as one of only six staff picks in Diamond’s November catalog, and arrives in comic shops throughout the country this month. The collection garnered strong notices during its initial release from large industry sites like Comic Shop News and Comic Book Resources while getting numerous rave reviews throughout the online geek community. Comic Nerds Unite chose it as their Breakout Book of the Year; Comics Bulletin called it ‘Insane, brilliant, and wonderful;’ and Raging Bullets added “I can’t recommend this comic enough.”

“The positive response to the stories really got us thinking about the potential for a feature film based on the characters; it didn’t take us long to generate a story idea that got us both excited,” explains co-writer Milo Miller.

And to that end the duo is announcing that a feature film adaptation of the Apama story is officially in development with partners in place and seeking additional financing to bring the film, planned to be shot in Cleveland, to the big screen with a substantially larger budget than the pair’s award-winning feature film Hero Tomorrow which premiered at San Diego Comic Con almost ten years ago.

Sikora and Miller will be appearing all three days at Wizard World Cleveland, February 26, 27, & 28 to meet with fans at booth #745. They will also be hosting a panel presentation titled Cleveland’s Resident Superhero - APAMA! PHASE 2 from 2:30-3:15 on Sunday, February 28.

Ted Sikora has directed numerous works for hire in the realms of fashion, music, and commercials as well as the narrative feature Hero Tomorrow, the recent Near West Theatre documentary Move On!, and an ongoing series of documentaries for The Cleveland Arts Prize.

Milo Miller is a writer who resides in Bay Village. Both met while students at the University of Akron.
Posted by Bob Ignizio at 12:00 AM