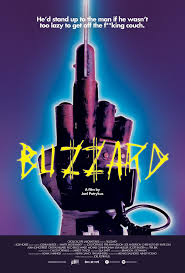 I've found the Johnny Manziel 2014-2016 soap opera with the Cleveland Browns to be a fascinating descent into the NE Ohio abyss. I mean who among us, who has long sought a job in the wasteland that is the Cleveland-area economy, hasn't wondered about who DID get hired. And what did that individual turn out to be?

I mean, what's with local recruiters? Do they know that when the drugs test turns out "positive" that it's a bad sign? Perhaps there's been a persistent misprint in HR handbooks.

Or maybe midwest life, from the Browns to the corporate world, is a lot like what's portrayed in the Rust Belt dark comedy BUZZARD, from Michigan-based filmmaker Joel Potrykus. Mr. Potrykus, I suspect, knows this recession well; who gets by in it, and who doesn't. I wouldn't quite call this nifty indie borderline-horror effort a traditional "workplace comedy." But, during the character study of an incorrigible punk and non-team player, it's hard not to think about what goes on, really, in all those glass-windowed offices full of cubicles and pods, to which many of we applicants remain strangers.


Marty (a memorable turn by Joshua Burge, whose my nominee to star in any biopic of Marilyn Manson) is a callow temp worker and horror-movie fan, openly contemptuous of his corporate job in a Wolverine State mortgage firm.

The amoral youth slacks off constantly, takes long, unexcused absences, and runs petty scams for free goods and services. Still, weirdly liked by almost all his co-workers and emboldened by these little victories against the system, Marty rises to a dangerous new level of self-serving defiance when he steals client checks from the firm. He's already under suspicion by a no-nonsense office manager.

Suddenly, for once in his life fearful at the consequences, Marty shuns work altogether and hides out, first becoming a houseguest-from-hell for a tolerant nerd of a fellow employee (amusingly played by the director) who shares some of Marty's creepy tastes in media and fun.

After wearing out his welcome, Marty absconds to Detroit on a seemingly one-way downward spiral, with time and money running out. Marty happens to be carrying a few favored possessions, including monster masks and a homemade Freddy Krueger glove (the late Cleveland native Wes Craven would be proud of the tribute) with genuine knife-fingers. It ultimately plays a fateful role in the saga of one of the more despicable characters I promise you've seen on screens lately. Far more so than DESPICABLE ME.

The ending is nihilistic indeed (as well as a cute, if puzzling, nod to Hal Ashby's BEING THERE), suggesting that a rotten, dispirited workplace-cum-society like the one shown here richly deserves a rotten (but spirited) guy like young Marty. I'm informed, mainly from outside sources (because I dont get to hang out with millennials much, having not had many jobs alongside them), that Marty is a particular `type' called a "horror punk." Well gosh, if I'd known that's all it takes to get in dutch with a business firm and a temp agency I'd have subscribed to Fangoria and Gorezone. Wasted all that time going to college instead.

BUZZARD comes billed as the filmmaker's final entry in what the artiste du cinema calls his "animal trilogy." Evidently it was preceded by a werewolf short called COYOTE and a dark comedy called APE, although that's pretty esoteric; I cannot claim to have seen all three and couldn't tell you anyone besides Joel Potrykus who may have. It's okay; prior knowledge of those other titles is unnecessary to be amused and appalled by BUZZARD. To all the horror punks out there with zero work ethic, I hear there are openings on the Browns playing roster and management. You can thank me later. (3 out of 4 stars)

Posted by Charles Cassady Jr. at 1:35 AM