[BOY AND THE WORLD opens in Akron Friday February 5th at the Nightlight Cinema.] 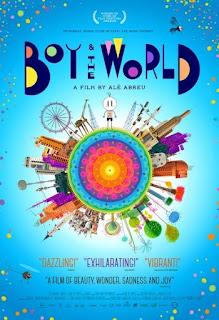 There are some movies that I admire and respect far more than I like them. Ale Abreu's BOY AND THE WORLD is just such a film. It’s the kind of imaginative, highly artistic animated film that seeks to push the boundaries of the form. No anthropomorphic animals or vehicles or toys rendered in the all too familiar CGI style we’ve come to expect from Disney/Pixar and their imitators. This is animation with a distinctive artistic style and voice, rendered largely by hand (although these days, at least a computer assist is all but certain) that looks like nothing else you’ve ever seen on screen.

So what’s the problem? For this reviewer, it’s all far too abstract and boring. And I almost hate myself for writing that, given how cookie cutter most animated kids fare is. This is something truly original, I feel like I should be singing its praises. But I can’t, because as I sat there watching the film’s impressionistic critique of modern life, all without any dialogue, nothing was connecting with me.

No doubt there will be those who enjoy the film far more than I did. Certainly the critics have, as it enjoys a 93% rating on Rotten Tomatoes as I write this.  It’s also not surprising that the film was nominated for an Oscar. Aside from the fact that on an artistic level, it is an impressive accomplishment, it plays like a feature length version of the kind of animated films that usually get nominated in the animated shorts category. Many of which also try my patience at much shorter lengths. Again, I feel bad slamming this movie, but I could only recommend it in the same way that I’d tell my 5 year old son to eat his vegetables. 2 ½ out of 4 stars.
Posted by Bob Ignizio at 2:12 PM