Arabian Nights Volume 2: The Desolate One (February 13th and 14th at the Cleveland Cinematheque)


[ARABIAN NIGHTS VOLUME 2: THE DESOLATE ONE screens Saturday February 13th at 6:45 pm and Sunday February 14th at 8:35 pm at the Cleveland Cinematheque.] 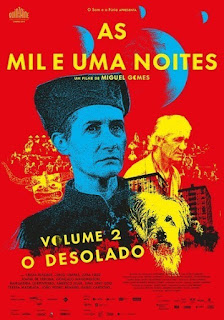 Scherezade returns with more surreal and satirical tales of 21st century Portugese life under austerity in Miguel Gomes’ ARABIAN NIGHTS VOLUME 2: THE DESOLATE ONE. As with the first film in this trilogy, THE DESOLATE ONE is not an adaptation of the 1001 Nights, but rather uses its structure to address more contemporary concerns in a fable like format. The specifics of the stories have changed, but the overall style and thematic concerns remain the same.

This second installment jumps right in to its first tale involving an unlikeable fugitive who becomes an unlikely folk hero. Next up is an abstract depiction of a trial in which a mother and son are accused of selling their landlord’s furniture. What seems like a straightforward case soon becomes anything but as it leads backwards from one crime to another, implicating both social institutions and the wealthy elite as the real culprits. The final segment is about a dog named Dixie who gets shuttled from one owner to another, helping some cope with personal issues while at the same time forcing others to face things they’d rather forget.

Aside from running time, there’s little reason to chop the complete 6 hour work up into three parts; for all intents and purposes, this is one long film. Nonetheless, this middle segment is the one that Portugal chose as their official entry to compete for the “Best Foreign Language Film” Oscar. It’s not better or worse than its predecessor, but each installment stands on its own sufficiently well enough. Those who enjoy challenging, thoughtful arthouse fare won’t be disappointed. 3 ½ out of 4 stars.
Posted by Bob Ignizio at 1:16 AM