Arabian Nights Volume 1: The Restless One (February 6th and 7th at the Cleveland Cinematheque)


[ARABIAN NIGHTS VOLUME 1: THE RESTLESS ONE screens Saturday February 6th at 6:45 pm and Sunday February 7th at 8:15 pm at the Cleveland Cinematheque.] 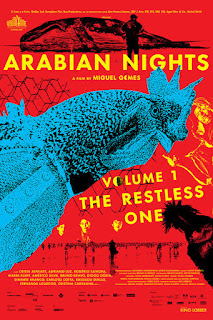 Although it takes its name from the classic literary collection, ARABIAN NIGHTS VOLUME 1: THE RESTLESS ONE is not an adaptation. Rather it takes the structure of One Thousand and One Nights,  in which the wife of a murderous sultan keeps herself alive by telling her husband stories each night that end on a cliffhanger. Well, that’s the conceit, anyway. It doesn’t quite feel that way, despite efforts to sell viewers on the notion through onscreen titles, but honestly it doesn’t matter. The film nonetheless accomplishes the task of connecting its disparate tales.

The film begins with a faux documentary segment that lasts nearly a half hour. In this portion, writer/director Miguel Gomes tries to find some commonality between the story of a Portugese shipyard shutting down and putting hundreds of people out of work, and efforts to control the country’s wasp population. Eventually the filmmaker finds this task impossible and tries to run away from his own movie. Only then do the opening credits run, along with an explanation of the film’s ties to its namesake.

Other segments deal with a group of politicians, bankers, and union bosses who are given magical ever-lasting erections, a rooster on trial for crowing too early, and a love triangle (re-enacted by kids) punctuated by acts of arson.

Just beneath the surface of the satirical and often surreal tales lies pointed political commentary. To compare the film to the sixties/seventies works of Jean Luc Godard, Luis Bunuel, and Antonio Passolini is not unfounded, nor is it unwarranted to mention Gomes (who also directed 2012’s excellent TABU) in the same breath as these revered filmmakers. 3 ½ out of 4 stars.
Posted by Bob Ignizio at 12:00 AM