The Revenant (openng in Cleveland on January 8th) 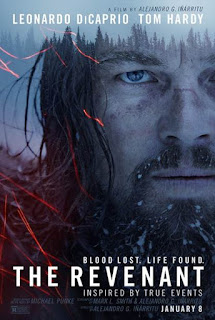 In terms of plot, THE REVENANT is kind of like a cross between a seventies Clint Eastwood western/revenge movie like THE OUTLAW JOSEY WALES, and a western survival film of that same era like JEREMIAH JOHNSON. The specifics derive from a novel of the same name by Michael Punke, which was itself based on the true story of frontier scout Hugh Glass. And to be sure, the story of Mr. Glass, both in real life and in this slightly fictionalized version is quite gripping. But as Roger Ebert was fond of saying, it’s not what a movie is about, it’s how it is about it.

Alejandro G. Iñárritu’s THE REVENANT is “about it” in a way that reminds one of the films of Terrence Malick. Writer Chris Wisniewski’s comments on Malick from Reverse Shot magazine could just as easily apply here: “Those rambling philosophical voiceovers; the placid images of nature, offering quiet contrast to the evil deeds of men; the stunning cinematography, often achieved with natural light; the striking use of music.”

In Malick’s tighter films from the seventies like BADLANDS and DAYS OF HEAVEN that approach yields tremendous rewards. But as Malick’s films became longer and looser beginning with THE THIN RED LINE, they became more distancing to many viewers. I still like his work up through 2005’s THE NEW WORLD, but starting with TREE OF LIFE in 2011, Malick’s films have become increasingly self-indulgent and unsatisfying.

Sadly, although I think Iñárritu is aiming for something akin to THE NEW WORLD, he lands much closer to TREE OF LIFE and its equally obtuse follow-up TO THE WONDER. Like those films, THE REVENANT looks quite beautiful and feels oh so important, but never makes the case that it’s worthy of such a high minded and heavy handed approach. Fortunately, the story is such a compelling one that Iñárritu’s artistic pretensions can’t fully drain it of interest.

Glass, played by Leonardo DiCaprio, survives a raid on his trapping party by hostile Ree Indians only to be brutally attacked by a bear shortly thereafter. The rest of the party leaves moves on, leaving behind Glass’ half-native son Hawk (Forrest Goodluck), a young trapper named Bridger (Will Poulter), and roughhewn veteran frontiersman John Fitzgerald (Tom Hardy) to give the injured man a proper burial when the time comes. Fitzgerald doesn’t want to wait, though, and when Hawk catches him trying to move things along, Fitzgerald kills the boy and hides the body.

When Bridger returns to the camp, Fitzgerald convinces him they are in imminent danger of being attacked by the Ree. Glass is hastily tossed into a shallow grave as the other trappers hightail it out of there. Evidently through sheer force of will alone, he survives and sets out for revenge, occasionally crossing paths with the Ree who attacked his party earlier in the film, and who are on their own quest to rescue one of their women who has been captured by white men.

There’s also a brief interlude where a Pawnee Indian helps Glass and offers up words of wisdom about vengeance being in the hands of the creator, words that are repeated later in the film. If this is truly the theme Iñárritu is trying to convey, though, it doesn’t really gibe with what happens onscreen.

By the way, if you’re one of those people who likes actors to deliver their lines in such a way that you can actually tell what they’re staying, steer well clear of this one. Tom Hardy mumbles his way through as usual, while DiCaprio talks in a raspy whisper for much of the film. Which is reasonable for a character whose throat has been ripped open by a bear, don’t get me wrong. It’s just that it can get a bit frustrating if you actually want to know what the actors are saying.

Like I said, though, the story is a good one, and even if you can only make out every other word anyone is saying, it’s not like you won’t know what’s going on. It’s also admirable that DiCaprio did most of his own stunts, and while the shooting conditions reportedly drove the crew crazy, there’s no denying that the naturally lit cinematography is impressive. But the film keeps an emotional distance from its audience, rendering material that should be visceral and energetic somewhat inert. THE REVENANT strives for greatness, and that’s worthy of respect, but in the end it comes up short. 2 ½ out of 4 stars.
Posted by Bob Ignizio at 12:00 AM