Nanook of the North (January 17 at 1:30 p.m. at the Cleveland Museum of Art Morley Lecture Hall)

[NANOOK OF THE NORTH screens Sunday January 17th at 1:30 pm at the Cleveland Museum of Art Morley Lecture Hall.] 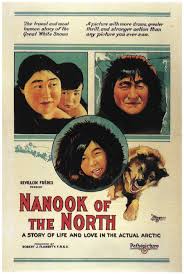 So overwhelming is the reputation of NAN00K OF THE NORTH, from 1922, that many histories cite it, incorrectly, as the first documentary ever made.

Drawing upon years of experience in northern mining camps and fur-trading posts, Robert Flaherty shot his idea of the daily struggles of a family of Inuits (the "happy-go-lucky Eskimo," as a title card puts it) from the Itimivuit tribe on the northeast coast of Hudson Bay. His nonfiction hero is Nanook (a name translating as "bear"), a well-known hunter in the region.

Opening scene is a timeless attention-grabber: Nanook emerging from what looks like a one-man kayak, only to be followed by his wife Nyla ("the Smiling One"), children, and dog, all somehow impossibly crammed into the tiny vessel. That sets the tone for the activities shown throughout, like seal and walrus hunts and the construction of an igloo, crucial to subsist in the harsh, frozen environment. Flaherty holds back just enough information from the viewer to pose some riddles during the film, and reportedly audiences would break into spontaneous applause upon realizing just what "the finishing touch" on the igloo was.

Even in its day, NANOOK was criticized from some quarters as an unrealistic portrayal of the Inuits, who had by then adapted to modern technology; and Flaherty was trying as much as possible to re-enact old native ways before the white man.

Cementing the picture's legend as a realistic fight for survival was the sad footnote that Nanook died two years after the movie's release -- popular accounts blame starvation, but there are reports that the sturdy-looking and hale fellow was chronically ill and coughing blood even during the film shoot. In the meantime his name cropped up around the world, in Broadway tunes and even as a European brand of Eskimo pie, and NANOOK was required viewing for anthropology/ethnology and documentary students for most of the 20th century.

For local viewers, it still has relevance concerning how to survive a Cleveland winter (I put that as a warning to potential visitors).

In 2001 the grandson of Nanook, Adamie Inukpuk, starred in the IMAX/OMNIMAX documentary GREAT NORTH. (4 out of 4 stars)